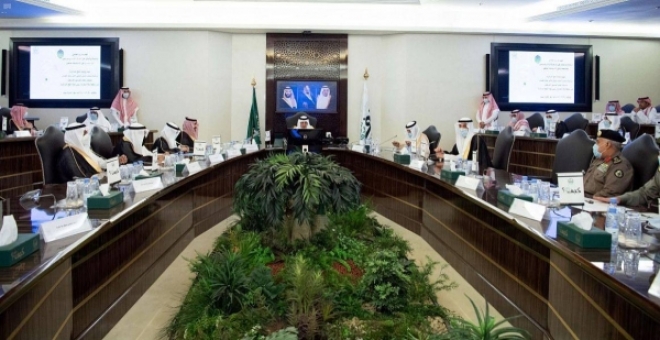 JEDDAH — Prince Khaled Al-Faisal, the emir of Makkah, an adviser to Custodian of the Two Holy Mosques King Salman and the chairman of the Central Hajj Committee (CHC), chaired a preparatory meeting for the next year’s Hajj. Prince Badr Bin Sultan, the deputy emir of the region, was also present in the meeting, the Saudi Press Agency reported.

Speaking on the occasion, Prince Khaled thanked all sectors that took part in the last Hajj season, stressing the need to continue work and early preparation for the next year. He highlighted the importance of preparing for the annual discussion on Hajj during which the relevant authorities will make deliberations on ways to further improve the services provided to the pilgrims in terms of housing, food, transportation, services, facilities, reception on arrival and departure.

The emir urged the concerned authorities to complete the projects in Makkah and the holy sites and continue the integral work to develop the Hajj and Umrah system. He also underlined the need for accelerating the steps of transforming the holy city of Makkah and the holy sites into a smart city in order to facilitate guests of God to perform their rituals smoothly and comfortably ever since their arrival in the holy land until their return to their respective countries safely.

During the meeting, the Ministry of Hajj and Umrah, the Health Affairs Department in the region, and the security authorities presented reports about their activities during the last Hajj season. The Custodian of the Two Holy Mosques Institute for Hajj and Umrah Research at Umm Al Qura University reviewed the ongoing studies that contribute to strengthening the positive factors observed during the Hajj season, in addition to the negativities aimed at avoiding them in the next Hajj season.


⇐ Previous:
7,000 carpets to be spread at Prophet’s Mosque Thursday
Next: ⇒
SAHUC President wary of self regulation in Hajj & Umrah fraternity merge