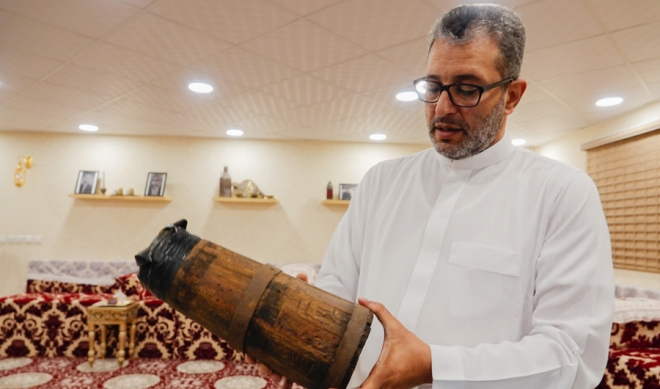 MAKKAH: Hatem Iraqi’s house is not just a home. It features more than 1,000 cultural and historical artifacts, some dating back 800 years.

“I inherited these artifacts and historical items from my father which date back to the Umayyad, Abbasid, and Ottoman ages, ushering in famous events and stories,” he told Arab News.

Iraqi said that he had dedicated his attention, effort and time to preserving the objects in his Makkah residence, and it was in his father’s will that he should keep and care for the valuable pieces.

They include Qur’ans, manuscripts, books, money, utensils, stamps, photos, maps, magazines, swords, musical instruments, tools, furniture, decorations and clothes. They tell the story of the Arabian Peninsula, from early times until the emergence and flourishing of modern Saudi Arabia. There are also antique and artifacts from other countries around the globe.

It was considered a challenge to have an interest in collecting such artifacts, Iraqi said, especially since the objects had such cultural significance and tremendous heritage. They were evidence of important events from Makkah’s past and “priceless jewels” that his father spent his life preserving as part of his devotion to history and to the monuments of Makkah.

His father Faisal Iraqi was known in Makkah for collecting historical artifacts and for his enthusiasm for the city’s heritage. He spent more than 50 years amassing the trove of objects, moving around and travelling a lot.

Hatem wished there were a Saudi equivalent to the Louvre, with private museums able to exhibit their historical possessions and treasures under one roof that could make the country a cultural hub and a way to attract attraction on an international level.

“It is noteworthy that, by 2030, more than 30 million visitors and pilgrims would be able to visit this museum and get acquainted with the rich cultural heritage of this country at all levels, including the cultural and cognitive ones, and on the level of defining the historical artifacts passed over from one generation to the other,” he said, referring to one of the most important goals in the Kingdom’s Vision 2030 reform plan to have 30 million pilgrims visiting the country by 2030.

Makkah’s museums should be taken care of, especially private ones, he said, and people should look to tourism as an industry through which Saudis could present their vision, objectives, and aspirations.

These artifacts and historical items date back to the Umayyad, Abbasid, and Ottoman eras.

“Makkah is the region which every Muslim aims to visit, for they have heard of this city and its great heritage in major reference books. So they would come to live this experience and grasp this knowledge. Our role in this regard is to provide cognitive doses and cope with this touristic vision through setting museums according to international criteria, supporting them and considering them an active economic potential.”

He added that the people of Makkah had, throughout history, proved that their relationships with visitors and pilgrims were strong and renewable, and that they felt proud to serve the visitors of Allah.”

In old times, he recalled, the people of Makkah used to open their doors to host pilgrims and visitors in their own houses during seasonal times like Hajj and Umrah. They also used to share their food with pilgrims in spite of hardship, starvation, and need.

“Now it is time for pilgrims and visitors to visit these houses one more time and get acquainted with the historical possessions that reflect the long-standing history of Makkah in serving the visitors of the house of Allah,” Iraqi said.


⇐ Previous:
Indonesia prepares 3 scenarios for haj amid pandemic
Next: ⇒
The raised part of the Kaaba’s Kiswa was lowered again