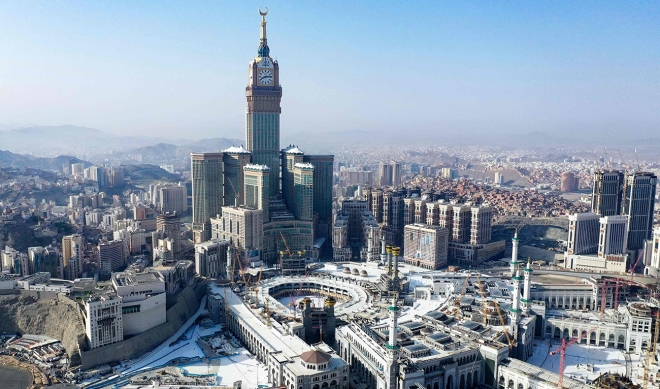 MAKKAH: Makkah hotel prices have been slashed to unprecedented levels in the Umrah season, with the price of rooms dropping as low as SR38 ($10) in some areas.

Five-star hotels with a full view of the Grand Mosque in Makkah are getting ready to resume their activity and restore normality to the hotel industry by offering great discounts.

The holy city contains more than 1,400 hotels, which make up more than two third of the accommodation sector in the whole of Saudi Arabia.

Known to have the highest prices through the year, which peak about three times during busy seasons, hotel rooms near the Grand Mosque currently cost between SR250 and SR700 ($77-$187).

A tweet by Hajj and Umrah Minister Dr. Mohammed Saleh Benten, brought attention to central Makkah hotels that have endured through the testing times of the pandemic.

Benten expressed his gratitude and happiness for the striking offers made by Makkah hotels, and described them as safe environments that take health requirements into account.

Abdullah Filali, chairman of the hotel committee at the Makkah Chamber of Commerce and Industry, told Arab News that the promotions announced by some hotels are a gradual means to revitalize the sector. He said the pricing is just the beginning of a gradual, progressive return to health for the troubled industry.

Filali noted that prices do not reflect employment volume, which fell to the low levels after the pandemic hit. “All hotels had to resort to the state aid ‘SANED,’ to keep their employees and fix their documents,” he said.

He added that only four central hotels had started to come back to life and that the recovery of the accommodation sector will be well underway by October 2021. Competitiveness will return by the end of 2023, Filali said.

The manager of one hotel overlooking central Makkah, Fadel Munqal, said that state efforts to serve Muslims are clear and evident through the protection of pilgrim safety. Steps to resume Umrah were compliant with health and precautionary plans and ensure the protection of health and safety, he added.

“The Kingdom seeks to reach the highest levels of reassurance and readiness for all pilgrims of different nationalities, which will be achieved with the beginning of the third phase of the plan. It will indicate the actual comeback of the accommodation sector and enable pilgrims to experience an integrated spiritual and tourism experience,” Munqal said.

He added that the Kingdom sacrificed economic welfare in a noble move to protect pilgrim safety during Hajj and Umrah.

Munqal said that Saudi Arabia possesses the capabilities to help hotels compete — in compliance with precautionary measures — with the arrival of pilgrims from across the world. He added that Makkah provides Islamic sites, in addition to important historical museums.

The library of Makkah’s Grand Mosque has launched more than 16 initiatives to start welcoming visitors. The library will receive 30 visitors per hour amid strict social distancing measures.