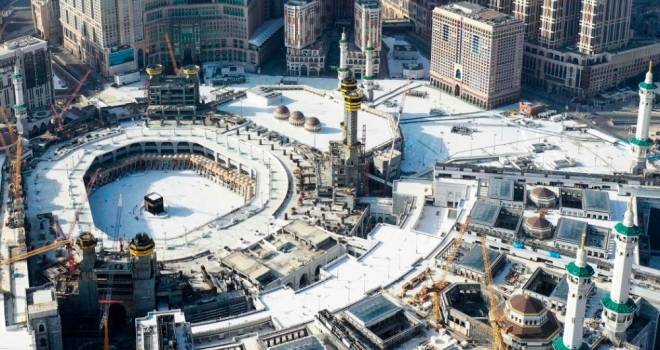 JEDDAH: At least 24,000 pilgrims have performed Umrah since the Grand Mosque in Makkah reopened its doors to worshippers on Saturday, with no reported cases of the coronavirus disease (COVID-19), figures have revealed.

The General Presidency for the Affairs of the Two Holy Mosques on Wednesday said that strict health and safety measures had been introduced to protect pilgrims and help stop the spread of the virus.

“Our precautionary measures plan for Umrah with COVID-19 is based on protection, sanitization, crowd management, and raising awareness,” said presidency spokesperson Hani Haider.

“We have prepared four isolation sites for pilgrims with suspicious symptoms. However, no suspected COVID-19 case has yet been reported.”

In order to ensure social distancing, the presidency has designated special pathways for elderly and disabled people to help them safely perform Umrah rituals.

Haider pointed out that efforts were being concentrated on the sanitization of the Grand Mosque and its arenas with 4,000 workers doing an average 10 cleans a day. More than 1,800 liters of eco-friendly disinfectants and sanitizers were also being used to clean toilets six times each day.

Air-conditioning systems and filters were receiving nine daily cleans using ultraviolet sanitizing technology, and more than 200 hand-sanitizing devices had been distributed around the Grand Mosque.

A ban on food and drinks at the Grand Mosque remained in place but the presidency was looking to employ the latest technology to redistribute Zamzam water containers again while maintaining precautionary measures and preventing contact between pilgrims, added Haider.

Meanwhile, the presidency has been distributing tens of thousands of Zamzam bottles among pilgrims on a daily basis and its dedicated 1966 hotline was available around the clock to answer calls from worshippers.

The Saudi Ministry of Health announced on Wednesday 468 new cases of COVID-19 in the country, taking the total number of confirmed cases in the Kingdom to 337,711. There were currently 9,556 active cases, 913 of which were receiving medical care.

Madinah recorded the highest number of newly confirmed cases at 71, with Makkah reporting 53, Yanbu 31, and Al-Hofuf 29.

Madinah was the Saudi city that witnessed the highest number of recoveries at 118, with Jeddah and Riyadh recording 43 each, and Makkah 34 recoveries in the past 24 hours.

“Face masks are extremely important to maintain health in these circumstances and no harm will result from wearing them on a daily basis. Some people have been wearing them for years due to their work necessities without any harm coming to them,” he said.

Al-Aly noted that the Kingdom’s success in curbing the spread of infection was chiefly due to public diligence on the wearing of masks, adding that some countries were witnessing a second wave of COVID-19 partly as a result of people going too far in relaxing their commitment to preventive behaviors.

The ministry has so far conducted 6,828,117 polymerase chain reaction tests since the virus outbreak in the country in early March, with 52,184 carried out in the latest 24-hour period.