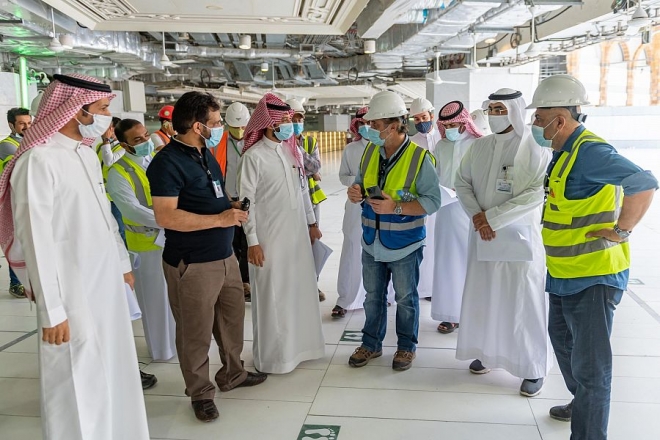 Saudi Arabia's Agency for Projects and Engineering at the General Presidency for the Affairs of the Grand Mosque and the Prophet’s Mosque has shared details on the Al-Mataf expansion project in Makkah, focusing on the readiness of the pathways and rest areas for Umrah pilgrims.

Construction on the tracks and areas designated for Umrah pilgrims has been completed in line with the approved plan for the expansion project, and the fences from the previously excluded areas have been removed.

The agency also ensured that all the sites, facilities, electromechanical systems, and operational services have been readied in line with international best standards for technical frameworks and methods.

The projects have been implemented under the directives of the General President for the Affairs of the Grand Mosque and the Prophet's Mosque, according to the state-run Saudi Press Agency.

The agency issued licenses to resume construction activities including Stage 3 of the expansion works at the Grand Mosque in Makkah in May 2020.

The resumed expansion work mainly covered the main gates of the project, installation of artificial stone ceilings, completion of arches overlooking the courtyard, and other major works.

Construction Week reported in September 2020 that Saudi Arabia will re-allow the performance of the Umrah – the pilgrimage to Makkah – including entering the Grand Mosque and visiting the Holy Raudhah in the Prophet’s Mosque in four stages, from October 2020, taking into account precautionary measures to curb the spread of COVID-19.

During the first stage, starting 4 October, only 6,000 citizens and expatriates per day have been permitted, which corresponds to 30% of the Grand Mosque’s total capacity.