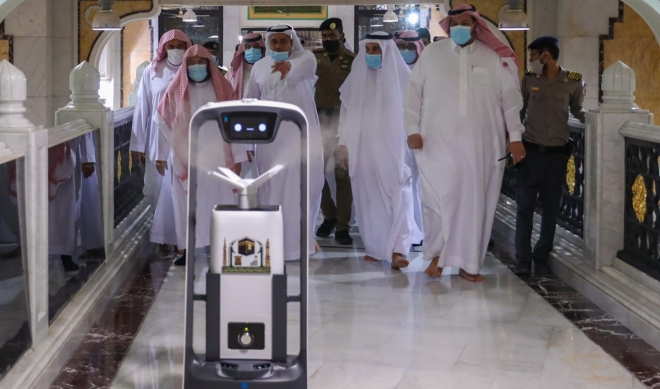 MAKKAH: The General Presidency for the Affairs of the Two Holy Mosques has announced that it will increase the number of robots used to sanitize the Grand Mosque.

More than 4,500 liters of sterilization materials are being used each day to disinfect the Grand Mosque to achieve a safe and healthy environment.

“The presidency is working to the highest standards to intensify sterilization operations in the Grand Mosque and its external squares, to provide the highest levels of readiness and to apply precautionary and preventive measures,” director of the environmental protection and epidemic control department at the presidency, Hassan Al-Suwairi, told Arab News.

He said that the presidency was studying all the options to mechanize technology and adapt it to serve pilgrims and create a safe and healthy environment in which they could practice their rituals with ease.

Al-Suwairi said that specialized robots were used for sanitization to keep pace with the latest inventions and to use the best technology devices in confronting the coronavirus.

“The smart robot, which is used in sterilization and environmental protection in enclosed spaces, works with an automatic control system programmed on a pre-map, and it holds a SLAM patent, with a high-performance atomization unit,” he said.

Al-Suwairi said that the launch of the high-precision robot would contribute to reducing the spread of coronavirus and other diseases and epidemics.

The robot performs internal sterilization on six levels, which improves the strength and safety of environmental health, and it intelligently analyzes sanitization requirements according to usage scenarios. It works from five to eight hours without human intervention.

The device can accommodate 23.8 liters. The volume of spraying is estimated at 2 liters per hour, and it eliminates bacteria in an area of 600 square meters at a time. The size of dry mist particles used in the disinfection process is from 5 to 15 micrometers.

“There are work teams in the General Presidency for the Affairs of the Grand Mosque and the Prophet’s Mosque that continuously study the possibility of increasing the number of smart robots in the Grand Mosque in proportion to its area,” Al-Suwairi said.

Al-Suwairi said that the technology reduced human intervention and measured the safety of environments that required continuous sterilization and disinfection.

He called on pilgrims to adhere to regulations and instructions to help the implementation of security, health and preventive plans aimed primarily to serve them and ensure their comfort.