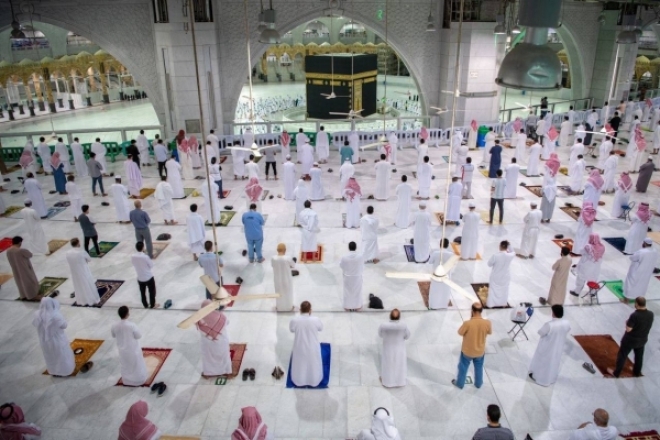 The second phase of the gradual resumption of the pilgrimage and visits to the Two Holy Mosques takes into account observing the precautionary health measures across the Grand Mosque.

The Ministry of Hajj and Umrah, in cooperation with the concerned authorities, have raised the degree of readiness and all preparations for the service of pilgrims in accordance with the highest quality standards.

In addition they have applied all precautionary measures, and using all technical systems and electronic programs to facilitate the procedures and provide full services with all speed and perfection.

More than 600,000 worshipers will be issued permits to perform prayers at the Grand Mosque along with over 250,000 Umrah pilgrims as part of the second phase, which will conclude on Oct. 31.

This comes in implementation of the royal directives to gradually allow the performance of Umrah and the visit according to four stages, while taking necessary health precautions in response to the aspirations of many of Muslims inside the Kingdom or abroad to perform the rituals of Umrah and visit.

According to the executive plan drawn up by government agencies, the second phase of the resumption of Umrah and the visit will witness greater numbers than the first phase, by 15,000 Umrah performers and 40,000 worshipers per day as a maximum. Each group will be allocated 3 hours only to complete the rituals of Umrah.

A spokesman for the General Presidency for the Affairs of the Grand Mosque had said prior to the start of the second phase: “The pilgrims should abide by the time slot specified in the permits issued to them and must maintain the deadline for the entry and exit of the Grand Mosque.

“As part of the directives, the pilgrims must maintain the physical distance of one and a half meters from each other, wear facemasks, sanitize hands regularly and cooperate with the employees of the presidency and the authorities working to serve pilgrims and worshipers.”

The latest official statistics issued by the Ministry of Hajj and Umrah revealed that a total of 1.2 million pilgrims have registered with the Umrah application Eatmarna during the period between Sept. 27 and Oct. 17 to perform the pilgrimage.

The ministry confirmed that no cases of coronavirus infection was detected among the pilgrims in the entire phase.

The number of pilgrims who performed the ritual in the first phase of the gradual resumption of the Umrah pilgrimage during the period between Sept. 27 and Oct. 27 reached 54,000. Their level of satisfaction with the services provided reached 94 percent.

The permits issued for greeting the Prophet (peace be upon him) exceeded 21,000 while the number of permits issued to pray at Rawdah Al-Sharifah reached more than 30,000. —SG/SPA