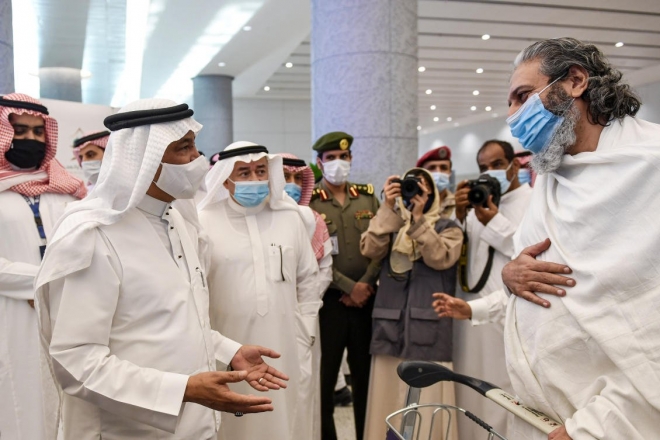 JEDDAH: More than 250 pilgrims have arrived in Saudi Arabia on their way to Makkah to perform Umrah for the first time in seven months.

Pilgrims were received by the Minister of Hajj and Umrah Muhammad Saleh Benten and his deputy, Abdel Fattah Mashat, as well as the airport director, Issam Nour.

Saudi Arabia’s Ambassador to Indonesia Issam Al-Thaqafi met Indonesian pilgrims at Jakarta International Airport, bidding them a safe trip and assuring them that their well-being was the priority of the Kingdom’s leadership.

Pilgrims were tested before arriving in the Kingdom. “It’s a slow and well-considered stage in which we are taking all health measures before the pilgrims arrival from their country, and throughout their Umrah journey in the Kingdom,” the deputy Hajj minister told the Al-Ekhbariya satellite TV channel.

“Everyone has been ready to receive pilgrims since the flight first arrived,” he said. “We are monitoring and revising everything on a daily basis.”

The ministry has set standards and controls for all service providers and Umrah companies to ensure the application of the highest levels of precautionary and preventive measures approved by the Ministry of Health.

Pilgrims can stay in the Kingdom for up to 10 days. They will undergo health checkups on arrival before being distributed among Hajj and Umrah companies, where each group should include no more than 50 people.

They will then be transported by buses to their hotels, where they will spend three days in isolation before they are assessed and permitted by the Health Ministry to perform Umrah.

Saudi Arabia will receive pilgrims from countries where the pandemic situation is stable. Countries are subject to continuous evaluation by the Saudi Center for Disease Prevention and Control (Weqaya) according to special protocols.

The Ministry of Hajj and Umrah called on pilgrims, visitors and worshipers from inside and outside of the Kingdom to adhere to precautionary and measures such as wearing a mask, keeping hands sanitized and maintaining social distancing.