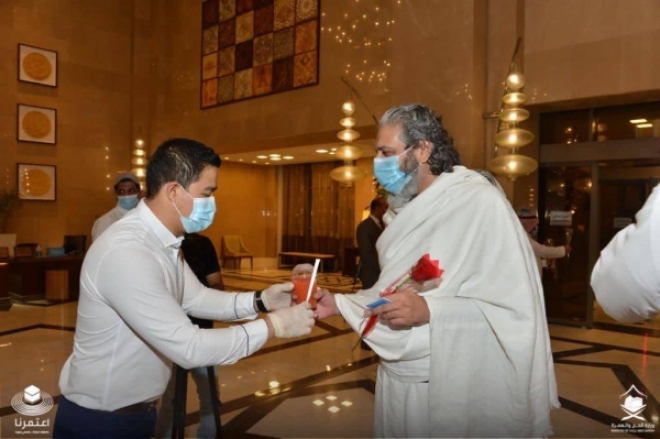 MAKKAH — Pilgrims who came from outside the Kingdom will start performing Umrah on Wednesday at the end of their three-day mandatory quarantine period.

The first batches of foreign pilgrims who came from Indonesia and Pakistan are staying in their hotels in Makkah after their arrival in the Kingdom on Sunday afternoon. This is in line with the coronavirus precautionary measures and preventive protocols set by the competent authorities while allowing foreign pilgrims to perform Umrah with the beginning of the third phase of the gradual resumption of Umrah service and from Nov. 1 (Sunday).

The first batches of pilgrims from outside the Kingdom landed at King Abdulaziz International Airport (KAIA) on Sunday. Minister of Hajj and Umrah Dr. Mohammed Saleh Benten, Deputy Minister Dr. Abdul Fattah Mashat, and Director of KAIA Isam Noor were among the senior officials who came to receive the pilgrims. Foreign pilgrims are allowed to perform Umrah and visit the Prophet’s Mosque in Madinah for the first time after a hiatus of eight months since the temporary suspension of Umrah due to the outbreak of the coronavirus pandemic.

In the third phase, as many as 20,000 Umrah pilgrims and 60,000 worshipers will be allowed entry to the Grand Mosque in Makkah on a daily basis. The pilgrims will perform their rituals in groups. A total of 32 groups, with each of them comprising 20 pilgrims, will be accommodated in one period of time and there will be six periods of time every day.

The Ministry of Hajj and Umrah stated that it has set 10 days as the maximum period of stay for foreign pilgrims in the Kingdom. The period available for reservation through the Eatmarna application is up to Dec. 31.

According to the protocols issued by the ministry, the age of foreign pilgrims shall be between 18 and 50 years and they must remain three days in quarantine at their accommodation in Makkah after their arrival in the Kingdom.

The regulations stipulate that pilgrims must have a PCR medical test certificate showing that they are free from coronavirus, issued by a reliable laboratory in their country, not more than 72 hours from the time of taking samples until the time of departure to the Kingdom.