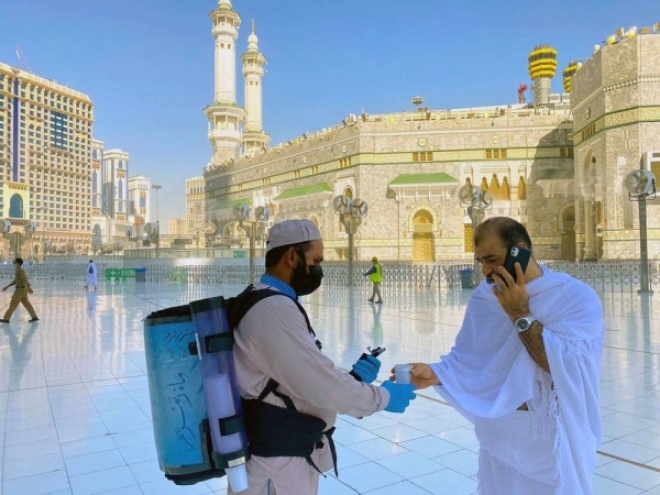 The General Presidency for the Affairs of the Two Holy Mosques distributed 1.2 single-use bottles of Zamzam water among the Umrah pilgrims and worshipers at the Grand Mosque in Makkah.

Ahmed Al-Nadwi, director of the Zamzam Watering Department at the Grand Mosque, said that the department is working to provide water services inside the Grand Mosque and at the entrances of its courtyards by distributing bottles among Umrah pilgrims, worshipers and fasting people.

“More than 500,000 bottles of Zamzam were distributed in the first phase, and about 700,000 bottles in the second phase at mataf (circumambulating area around the Holy Kaaba), mas’a (area for the ritual of sa’i between Safa and Marwah), the funeral prayer area, the first floor, King Fahd Expansion, as well as the new King Abdullah Expansion.

He said that there are workers carrying cylindrical containers of Zamzam water, stationed at the entrances of the holy mosque and stairs, and each container is carrying water to fill more than 50 disposable glasses.

“The Presidency has increased the number of officials to about 128 and they supervise some 600 workers who are distributing the holy water inside the Grand Mosque in line with all the precautionary measures and preventive protocols to stem the spread of coronavirus.