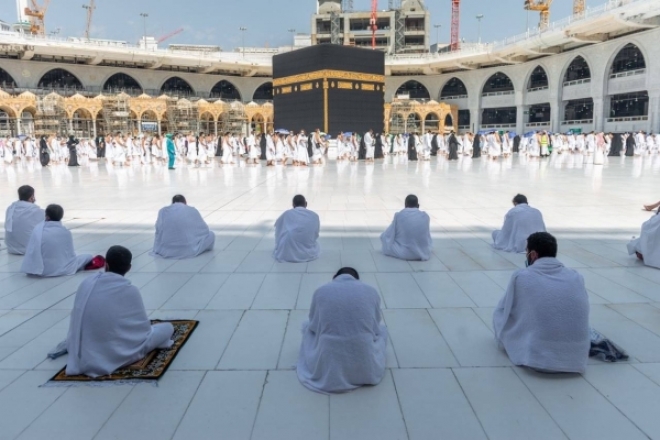 MAKKAH — The General Department for Crowd Management at the Grand Mosque in Makkah is organizing the entry and exit of Umrah pilgrims as well as worshipers at the mosque in a very smooth and orderly manner and that is strictly in compliance with the all the precautionary measures and preventive protocols to stem the spread of coronavirus.

This is in coordination and cooperation with various departments under the General Presidency for the Affairs of the Two Holy Mosques, Haram Security Forces, and other related agencies, according to a report in Al-Arabiya.net.

The department is closely monitoring the entire aspects of the crowd management and grouping of pilgrims and swiftly intervenes, in association with the relevant agencies, to address the negativities that obstruct the smooth flow of pilgrims and worshipers and their performance of rituals.

The department has taken a number of measures to ensure the smooth conduct of the crowd management around the clock so as to enable the pilgrims and worshipers perform their rituals in ease and comfort.

The department is closely supervising all the areas of the Grand Mosque including mataf (circumambulating area around the Holy Kaaba), mas’a (area for ritual of sa’i between Safa and Marwah), King Fahd and King Abdullah Extensions, passages leading to mataf and mas’a, and upper floors and courtyards of the mosque.

It also carries out research in removing hurdles that stand in the way of the movement of pilgrims, and that is strictly in compliance with the preventive protocols.

It is noteworthy that around 75 percent of the capacity of the Grand Mosque is open for both domestic and foreign pilgrims, worshipers and visitors with the third phase of the gradual resumption of Umrah that started on Nov. 1.

In the third phase, as many as 20,000 Umrah pilgrims and 60,000 worshippers will be allowed entry to the Grand Mosque on a daily basis. The pilgrims will perform their rituals in groups. The Ministry of Hajj and Umrah stated that it has set 10 days as the maximum period of stay for foreign pilgrims in the Kingdom. The period available for reservation through Eatmarna application is up to Dec. 31.

According to the protocols issued by the ministry, the age of foreign pilgrims shall be between 18 and 50 years and they must remain three days in quarantine at their accommodation in Makkah after their arrival in the Kingdom.

The regulations stipulate that pilgrims must have a PCR medical test certificate showing that they are free from coronavirus, issued by a reliable laboratory in their country, not more than 72 hours from the time of taking sample until the time of departure to the Kingdom.


⇐ Previous:
First batch of pilgrims from abroad arrive in Madinah after performing Umrah rituals
Next: ⇒
More than 400,000 have performed Umrah