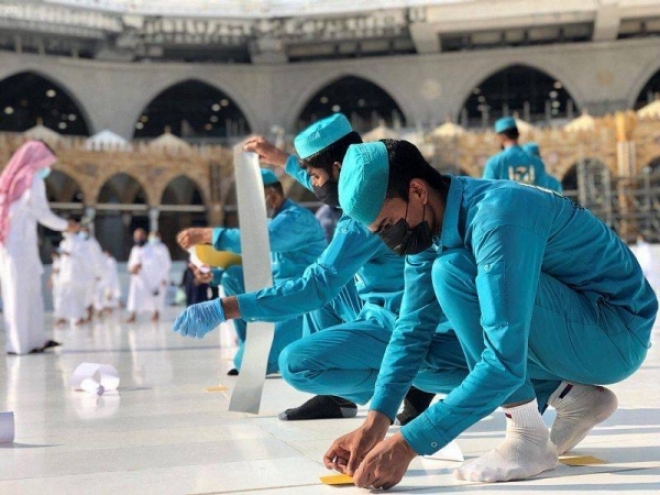 MAKKAH — The Presidency for the Affairs of the Two Holy Mosques has realigned special tracks for performing tawaf (circumambulation around the Holy Kaaba) in the Grand Mosque in anticipation of the expected increase in the number of Umrah pilgrims over the coming days.

The realignment has been made in a way ensuring the necessary physical distance between each pilgrim in compliance with the precautionary measures and preventive protocols to stem the spread of coronavirus.

The presidency has completed the work of removing the old stickers and placing the new ones to facilitate the movement of pilgrims during their circumambulation. More tracks have been earmarked for wheelchairs of the elderly and people with special needs.

This was in line with the directive of Sheikh Abdul Rahman Al-Sudais, head of the presidency. Sheikh Al-Sudais said that the presidency has mobilized all its human and material resources and capabilities while undertaking a mammoth exercise of supervising the reception of pilgrims during the third phase of the gradual resumption of the Umrah service.

All the arrangements are in place to receive the growing number of foreign pilgrims for the first time to perform their rituals easily and comfortably since the beginning of the third phase on Nov. 1.

In the third phase, as many as 20,000 Umrah pilgrims and 60,000 worshipers will be allowed entry to the Grand Mosque on a daily basis.

Al-Sudais said an integrated plan has been prepared to ensure the safety of pilgrims and worshipers in light of the pandemic.