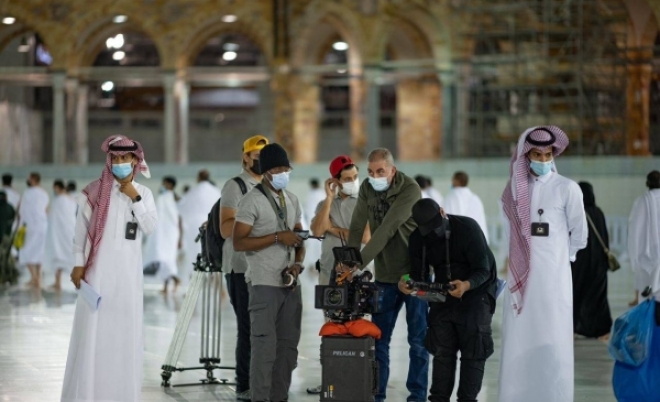 MAKKAH — The General Presidency for the Affairs of the Two Holy Mosques represented by the General Department of Media and Communication has begun production of a film depicting the remarkable efforts of the government of Custodian of the Two Holy Mosques King Salman to stem the spread of the coronavirus pandemic in the Grand Mosque in Makkah. The shooting of the film is expected to take 150 hours.

Sultan Al-Masoudi, the director of the department, said that the film would document the phase that the Grand Mosque went through during the pandemic period, and the efforts made by the presidency to ensure the safety of pilgrims and visitors to Islam’s holiest shrine with total compliance to the coronavirus precautionary measures and preventive protocols. The film will also showcase the mammoth resources and capabilities provided by the government as well as technological, technical, and human efforts and energies in the service of the Two Holy Mosques.

“The presidency has concluded a contract with one of the national media organizations for the production of the film. A number of distinguished media figures at the Presidency’s Media Department would also join hands to accomplish the project,” he said while noting that the documentary highlights the Kingdom’s leadership and great experience in its crowd management mechanism and its application of precautionary measures, in an integrated and safe system.

Al-Masoudi stated that the film shoot would take 10 days inside the Grand Mosque and its courtyards at a rate of 15 hours per day, through a qualified Saudi professional crew with vast experience in film production.