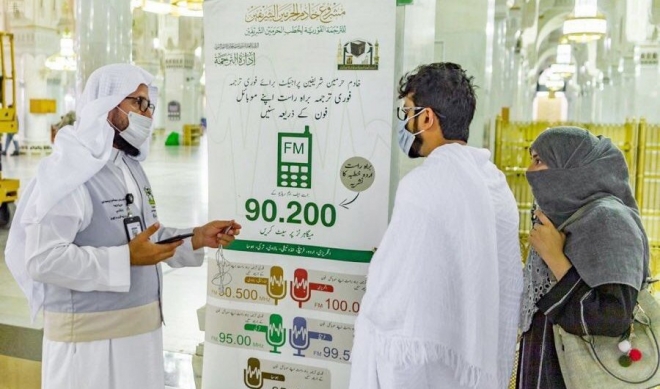 MAKKAH: The General Presidency for the Affairs of the Two Holy Mosques has recruited a group of distinguished translators speaking 21 languages to serve visitors in the Grand Mosque’s hallways.

The presidency translates the Friday sermon from the Grand Mosque, with the number of beneficiaries exceeding 5,000 inside the mosque and 20,000 on the Manarat Al-Haramain platform.

The Arafat Day sermon has been also translated for the past three years, benefiting more than two million worshippers.

Director of the General Administration of Translation Mashari Al-Massoudi said that translation at the Grand Mosque was a legal translation of the sermon and lessons, as well as providing on-site translation for visitors in their native language.

Translators are found in field locations in all the mosque’s entrances and internal hallways, as well as locations where non-Arabs gather, which vary from time to time and are determined based on studies.

Translators catch the attention of visitors — Umrah performers and worshippers — with their costume that is based on their spoken language.

Each translator also constantly repeats “I am here to help you” in their mother tongue, with a total of 21 languages represented.

Al-Massoudi said that sermons are translated into five international languages: English, Urdu, Malay, Farsi and French. This is to convey the message to the whole world and to increase the number of people benefiting from the translation through electronic platforms that broadcast sermons and lessons internationally.

The aim is to be a global model for translation into more than 10 languages in one place, through live communication and electronic platforms.

He said that translation is not restricted to the Grand Mosque but is also found in all the presidency’s facilities, in addition to bodies participating in conferences and seminars.