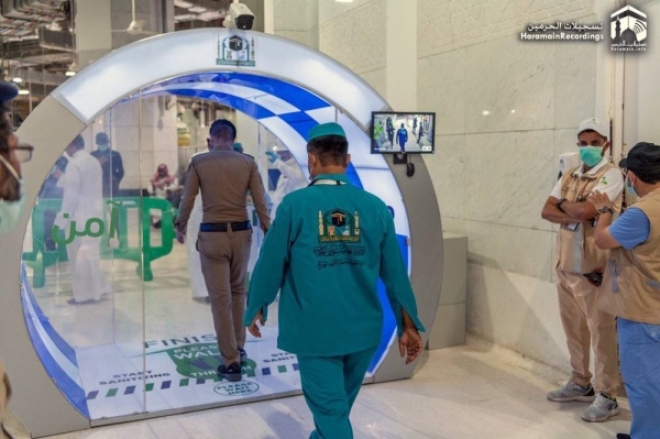 MAKKAH — Since the resumption of the Umrah service on Oct. 4, the General Presidency for the Affairs of the Two Holy Mosques has monitored temperatures of around four million Umrah pilgrims and visitors, using 25 thermal cameras that are installed at various entry gates of the mosque.

Hassan Al-Suwaihri, the director of the environmental protection and epidemic control department at the Grand Mosque, said that more than 100 employees have been trained to use thermal cameras to monitor the temperatures of the visitors of Islam’s holiest shrine as well as that of the presidency staff.

Al-Suwaihri said that the number of passages at entry gates has been increased to ensure the physical distance among pilgrims as well to facilitate thermal cameras detect those with symptoms of coronavirus. These cameras can monitor temperatures from a distance of six meters with high accuracy and can distinguish the visitor who has symptoms of high temperature and put it in a special list to facilitate his identification before he enters the Grand Mosque.

It is noteworthy that the presidency has made available 20 special sterilization equipment and they are spraying on vast areas of surfaces inside the Grand Mosque. They sterilize both the surface and the air simultaneously at a high speed and there are about 1.2 million microparticles of sterilization that remain in the air for about two hours. The dry steam equipment helps remove all remnants from the surface so as not to affect the pilgrims and visitors.