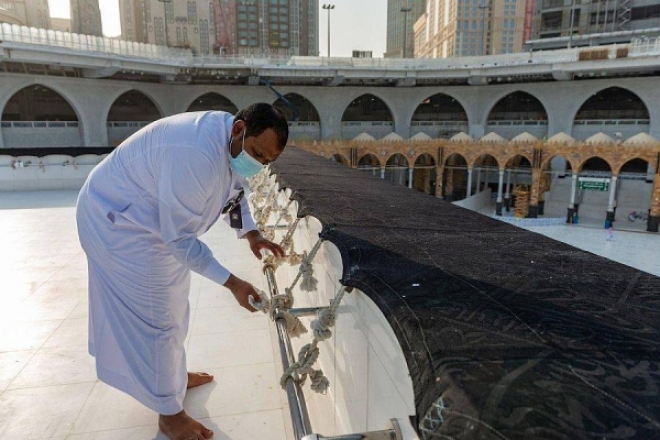 MAKKAH — A specialized technical team deployed by the General Presidency for the Affairs of the Two Holy Mosques has completed the cleaning work of the Holy Kaaba. The team just took 40 minutes to finish the task.

The presidency is carrying out the periodic work in accordance with a scheduled program.

Muhammad Al-Jabri, deputy head of the presidency for technical and service affairs, said that the Agency for Technical and Service Affairs under the presidency, represented by the Department of Cleaning and Carpet at the Grand Mosque, has performed the cleaning work of the terrace of the Holy Kaaba.

“The cleaning exercise is carried out in several phases, the first of which is sweeping the surface of the Kaaba, removing dust and bird droppings, then wiping the entire surface and holder of the kiswa (cover) as well as the surrounding wall, and the door to the roof of the Kaaba from outside, with wet towels, then all are sprayed with water and wiped again and then finish with the dehydration process,” he said adding this was accomplished within a period of time not exceeding 40 minutes.

Al-Jabri said that the cleaning work was done by a Saudi technical team, which is specialized in the latest devices and modern mechanisms provided by the presidency so as to maintain the quality and safety of marble, remove dirt, and preserve the cleanliness of the Holy Kaaba in particular, and the Grand Mosque in general.

Al-Jabri said that these services and efforts come in the implementation of the directives of Sheikh Abdul Rahman Al-Sudais, head of the presidency.