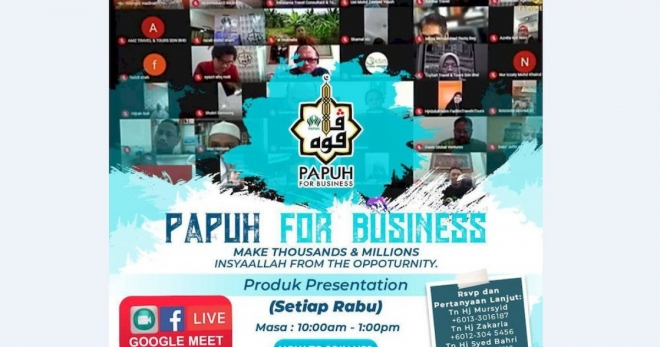 KUALA LUMPUR, Feb 17 — After a year of standing idle, travel agents under the Umrah and Haj Travel Agencies’ Association (Papuh) have launched an online marketplace to sell goods such as dates, perfumes, seafood, and even land lots as they seek an additional source of income.

Papuh president Datuk Seri Razali Mohd Sham today announced the online marketplace named “Papuh for Business”, and invited the public to browse its wares which will be exhibited through the Google Meet video conferencing platform every Wednesday.

other businesses while waiting for the government to re-open the tourism industry,” said Razali in a statement.

Papuh secretary Datuk Jeffri Sulaiman said although its members had been waiting for government aid for months, none came, and they were forced to take matters into their own hands.

“From there, we got the idea to have a platform for our members to conduct business,” said Jeffri when contacted.

The public can access the “Papuh for Business Google Meet” channel from 10am to 1pm every Wednesday here, through which they can buy directly from sellers.

“Currently, about 300 Papuh members have joined the initiative, and we also have non-Papuh members from our neighbour, Indonesia.

“As of now, the outlook is positive, our members already know what they want to sell and so on,” said Jeffri.

He added that “Papuh for Business” was not limited to Muslims, and was open to people of all races and religions.

The Covid-19 pandemic forced the government to put a stop to most international travel in March last year, affecting swathes of businesses in the travel and tourism industries.

Although the government has attempted to subsidise these businesses while waiting for the chance to reopen borders, its fiscal capacity has been largely limited, leaving business owners in financial ruin.