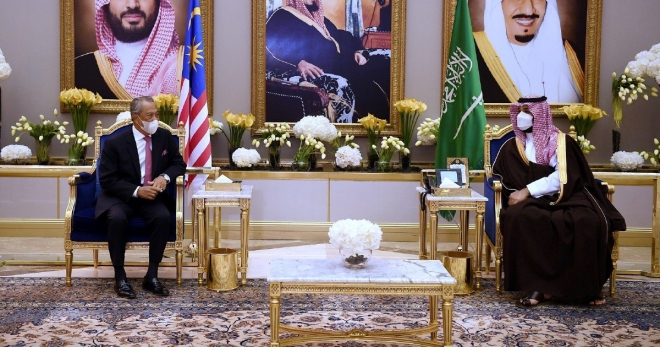 Malaysia has made a request to Saudi Arabia for the official haj quota to be increased from the current 31,600.

Prime Minister Tan Sri Muhyiddin Yassin said the request was made as Malaysia's population has increased to 31.95 million.

The increase in the annual haj quota, he said, would also allow more Malaysians to perform the haj.

Muhyiddin also requested for approval to allow Malaysian umrah pilgrims to perform the umrah at the soonest possible opportunity in the wake of the Covid-19 pandemic.

Reiterating Malaysia's commitment to further strengthen the existing fraternal relations between Malaysia and Saudi Arabia, Muhyiddin extended Malaysia's appreciation to Saudi ruler King Salman Abdulaziz Al-Saud at being given the opportunity to be the first leader of a country to undertake an official visit to the kingdom following the historic Al Ula Conference on Jan 5 last year.

"We are satisfied with the excellent state of brotherly relations and strong bond of friendship between Malaysia and Saudi Arabia and we affirm our commitment to elevate the existing bilateral ties to greater heights," he said.

The prime minister also expressed his appreciation to Saudi Arabia for its contribution of medical equipment to Malaysia through the King Salman Humanitarian Aid and Relief Centre (KSRelief) in combating the Covid-19 pandemic.

In the spirit of forging stronger ties, Muhyiddin said he welcomed the establishment of the Saudi-Malaysian Coordination Council (SMCC), previously known as the High Level Strategic Committee (HLSC), that will serve as an overarching bilateral platform for regular consultations between both countries in multiple sectors of cooperation.

Muhyiddin also expressed his satisfaction with the level of trade and investment relations between both countries, and welcomed more companies from Saudi Arabia to explore business opportunities with their Malaysian counterparts.

On this note, he welcomed the potential collaboration in the halal industry between the Islamic Development Department (Jakim) and the Saudi Standards, Metrology and Quality Organisation (SASO).

"We welcome the finalisation of the Memorandum of Understanding (MoU) and Agreement between both sides," he said.

Muhyiddin's visit to Saudi Arabia from March 6 to 9 is at the invitation of King Salman.

In Makkah, Muhyiddin and wife were granted access inside the Kaabah.

Muhyiddin is scheduled to fly to the United Arab Emirates (UAE) next to meet the Crown Prince of Abu Dhabi Sheikh Mohamed Zayed Al Nahyan, and UAE Prime Minister who is also the ruler of Dubai, Sheikh Mohammed Rashid Al Maktoum.