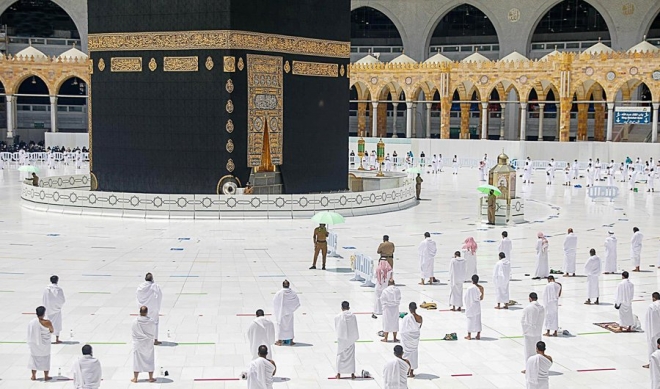 Authorities said on Tuesday that 150,000 people would be allowed to perform Umrah or prayers daily at Makkah’s Grand Mosque during Ramadan, which starts next week.

The General Presidency for the Affairs of the Two Holy Mosques said up to 100,000 worshippers would be allowed to pray at the Grand Mosque and that 50,000 pilgrims will be allowed to perform Umrah, as part of its plan to increase operational capacity.

The Ministry of Islamic Affairs, Guidance and Dawah said that Umrah permits will be given to pilgrims aged 65 and over who had already been vaccinated against coronavirus.

Sheikh Abdulrahman Al-Sudais, head of the Presidency of the Two Holy Mosques, said that inoculation is a requirement for entering the Grand Mosque and the Prophet’s Mosque in Madinah.

Minister of Islamic Affairs Dr. Abdullatif Al-Asheikh on Tuesday issued a directive with precautionary measures to prevent the spread of coronavirus during Ramadan.

It said that iftar, suhur and itikaf inside mosques during Ramadan would be suspended, while the number of locations for Eid Al-Fitr prayers would be expanded.

Al-Asheikh said that matters related to holding tarawih and qiyam prayers in mosques would be announced later.

The deputy minister of Hajj and Umrah, Dr. Abdel Fattah Mashat, said people wishing to perform Umrah during Ramadan would have to submit a permit application through the Tawakkalna app not the Eatmarna app, and that there would be an update in the coming days to provide the permits.

Permits will be distributed on a weekly basis during Ramadan for pilgrims and people wishing to pray at the Two Holy Mosques, he added, and new openings would be available with any cancellations.

The Kingdom’s number of COVID-19 recoveries rose to 380,772, while the death toll rose to 6,711 following a further seven coronavirus-related deaths in the past 24 hours.

There have been 62,432 PCR tests in the past 24 hours, increasing the total carried out so far to more than 15.4 million.