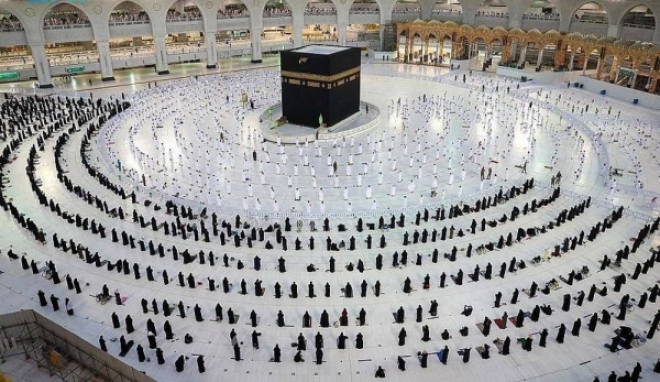 MAKKAH — Custodian of the Two Holy Mosques King Salman has ordered to shorten taraweeh prayers (special night prayers) at the Grand Mosque in Makkah and the Prophet’s Mosque in Madinah during the holy month of Ramadan.

Sheikh Abdul Rahman Al-Sudais, head of the Presidency for the Affairs of the Two Holy Mosques, said that the taraweeh prayers will be shortened to 10 raka’ts from 20 raka’ts, and that will be strictly in compliance with the precautionary measures and preventive protocols, prepared by the presidency and other relevant agencies involved in serving the pilgrims and ensuring their safety from coronavirus.

Sheikh Al-Sudais highlighted the Saudi leadership’s keenness to continue facilitating the performance of rituals at the Two Holy Mosques by mobilizing all means to enable the pilgrims to perform their rituals in a safe and healthy environment that meets all global health standards used in the fields of infection control.

“Custodian of the Two Holy Mosques King Salman and Crown Prince Muhammad Bin Salman are continuously following up on everything that would provide the best services for the pilgrims and worshipers during the unprecedented season. The presidency has equipped its full human and mechanical capabilities to serve pilgrims and worshipers during Ramadan in cooperation with all parties involved in serving the guests of God,” he said.

The Saudi authorities allowed performance of Umrah and prayer at the Two Holy Mosques during the holy month, which is expected to start on Tuesday, but suspended the ritual of i’tikaf (spiritual seclusion) and iftar meal at the holy mosques.

During last Ramadan, not only Umrah but also five daily obligatory prayers, taraweeh prayers, and iftar meal had been suspended for the domestic and foreign pilgrims at the Two Holy Mosques following the outbreak of the pandemic.

However, the five daily prayers and 10 raka’ts of taraweeh prayers were performed at the Two Holy Mosques with the attendance of the presidency officials and sterilization workers. During the holy month, the capacity of the Grand Mosque will be raised in order to accommodate 50,000 vaccinated Umrah pilgrims and 100,000 worshipers.