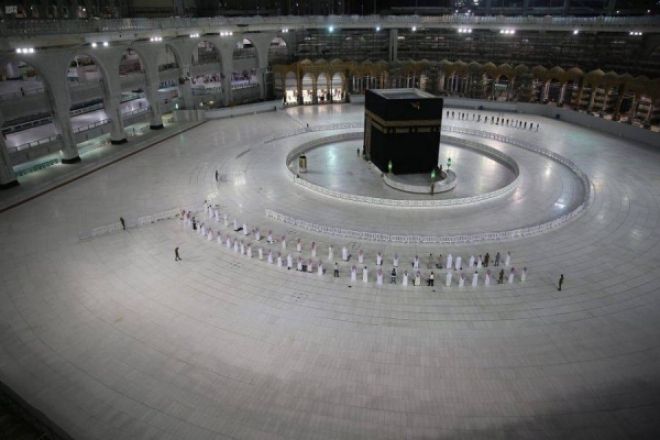 MAKKAH — The Ministry of Hajj and Umrah announced on Monday that pilgrims would be granted permit to perform Umrah only one time during the holy month of Ramadan, which begins on Tuesday.

However, worshipers can obtain permit for performance of all the five obligatory prayers at the Grand Mosque in Makkah on a daily basis throughout the fasting month, the ministry said in a statement on its Twitter account.

The ministry’s Eatmarna application revealed that the pilgrims who obtained Umrah permit cannot apply for another Umrah permit before the expiry of the first one.

The pilgrims can also apply for permits for performance of obligatory prayers at the Grand Mosque. The worshippers will be issued permits for five prayers for one day at a time.

It is not possible to get permits issued for more than one day. They can apply for the issuance of permit for the second day after the expiry of the duration of the first day’s permits. The permits issued for Isha prayer includes performance of taraweeh prayers (special night prayers) too.

Custodian of the Two Holy Mosques King Salman had ordered on Monday to shorten taraweeh prayers at the Grand Mosque in Makkah and the Prophet’s Mosque in Madinah during the holy month.

Sheikh Abdul Rahman Al-Sudais, head of the Presidency for the Affairs of the Two Holy Mosques, said that the taraweeh prayers will be shortened to 10 raka’ts from 20 raka’ts, and that will be strictly in compliance with the precautionary measures and preventive protocols, prepared by the presidency and other relevant agencies involved in serving the pilgrims and ensuring their safety from coronavirus.

The Saudi authorities allowed performance of Umrah and prayer at the Two Holy Mosques during the holy month but suspended the ritual of i’tikaf (spiritual seclusion) and iftar meal at the holy mosques. During the holy month, the capacity of the Grand Mosque will be raised in order to accommodate 50,000 vaccinated Umrah pilgrims and 100,000 worshipers.