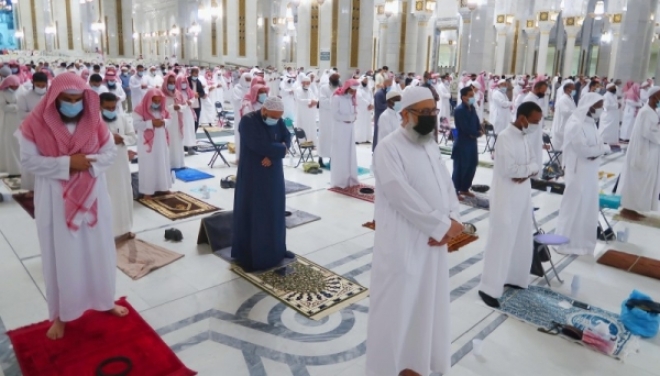 MAKKAH — Amid an atmosphere of overwhelming spirituality and faith, worshipers on Monday performed Taraweeh prayer at the Grand Mosque on the first night of Ramadan while adhering to all precautionary measures and health protocols.

Only immunized individuals, who applied for and received permits through the Tawakkalna application, were allowed into the mosque to perform Taraweeh.

Meanwhile, the General Presidency for the Affairs of the Two Holy Mosques has intensified its disinfection, sterilization, and operational efforts, in addition to the distribution of disposable Zamzam water bottles to the visitors and the worshipers.

The presidency is also supervising the movement inside the Grand Mosque, opening the gates of the Grand Mosque, organizing the entry and exit of visitors, identifying paths allocated for persons with disabilities among many other services it is providing.

Moreover, the presidency is managing the movement inside the Grand Mosque and its courtyards through observers manning the main and secondary corridors in order to ensure a smooth flow of worshipers and visitors through different sections of the Grand mosque amid precautionary and preventive measures inside the mosque.

The presidency has recruited more than 100 gate observers to receive worshipers and direct them to the designated places and has intensified the services of providing water to visitors and worshipers and in accordance with health protocols. The presidency has prepared a plan and a mechanism under which the number of water containers has been increased to 27,000 and it is being distributed by special vehicles.

The presidency is keen to maintain that sterilization operations around the clock and around 5,000 liters of disinfectant material is used to sterilize all surfaces and floors in order to create a healthy and pandemic-free atmosphere, in addition to deploying more than 45 field teams to work 24 hours to sterilize the Grand Mosque and its courtyards.


⇐ Previous:
Hajj Organizer Recommends to Suspend 2021 Pilgrimage
Next: ⇒
No repeat of Umrah in Ramadan