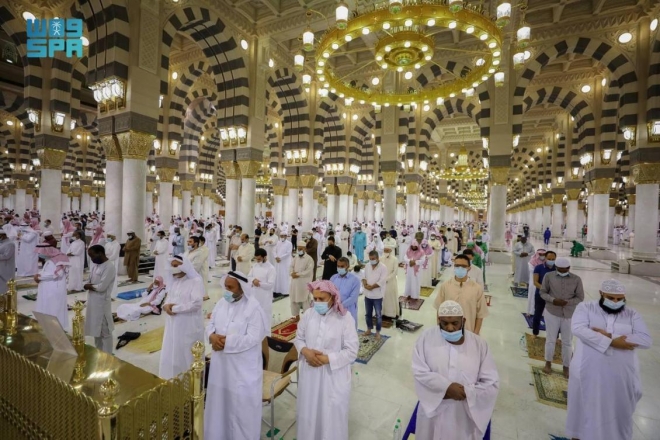 The Prophet’s Mosque in Madinah is ready to receive worshippers during the last 10 days of Ramadan.

The last 10 days of Ramadan, due to start on Sunday, are considered to be the most blessed period of the holy month, during which the Night of Power falls.

Muslims believe that the Night of Power (Lailat Al-Qadr) is the night when the first verses of the Qur’an were revealed to the Prophet Muhammad, and mosques all around the world are filled with the faithful during this period. The reward for worshipping on this night is better than the reward of 1000 months of worship at other times, according to the Qur’an.

The night on which the Night of Power falls is not known so as to encourage worshippers to seek the exact night throughout this time, although it is believed to fall on one of the odd nights in the 10-day period.

Strict precautionary measures are in place to ensure that the coronavirus is not spread at the Prophet’s Mosque and steps are being taken to ensure that worshippers are able to worship in comfort, Saudi Press Agency (SPA) reported.

Meanwhile, the Ministry of Hajj and Umrah has announced that permits for midnight prayers (Qiyamul Layl) at the Grand Mosque can be reserved via the Eatmarna and Tawakkalna apps.


⇐ Previous:
Our solutions are smart and aim to enrich pilgrims’ experience
Next: ⇒
Saudi winner of 1 mln riyals hajj crowd management prize plugs gap in use of big data and AI