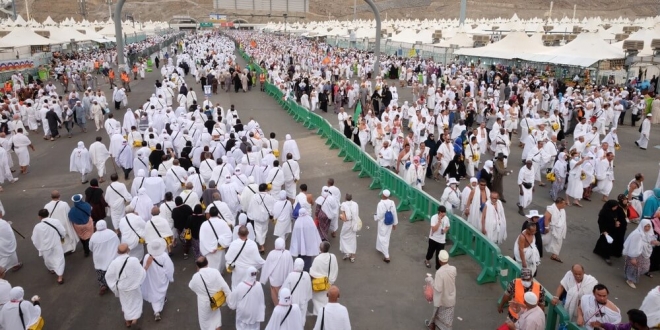 In 2015, a deadly stampede killed at least 717 hajj pilgrims and injured hundreds more. The incident happened as pilgrims were performing the symbolic stoning of the devil at the jamarat in Mina, just outside Makkah. In that year, 1.95 million Muslims were in Saudi Arabia to perform the hajj.

Controlling a crowd of millions performing religious rituals in the same place at the same time is one of Saudi Arabia’s key responsibilities for the hajj. This is currently done manually, with officials using their eyes to monitor crowds, keep people separated and observe signs that may lead to congestion.

But for all their training and experience, these crowd managers would not have time to react if they detect distress signals a couple of minutes before an incident could potentially erupt.

The year after the Mina incident, the Saudi government launched its Vision 2030, the masterplan to diversify the country’s heavy reliance away from hydrocarbons, and that put tech at the heart of innovation and advancement.

Since then, there has been a drive to find solutions to keep pilgrims safe, which is much needed considering the government’s goal of welcoming around 5 million of them by 2030.

At last month’s first edition of the King Abdullah University of Science and Technology (KAUST) challenge for hajj and umrah solutions, a new tech platform beat ten other finalists to win the 1 million riyals ($266,665) grand prize in the crowd management category.

The solution being developed by Saudi company FirstCity integrates artificial intelligence and real-time data to anticipate crowd dynamics and behavior during the hajj. It uses advanced analytics to give a one-hour notice for crowd managers to react, enabling early intervention and preventing major incidents.

“What we proposed is a unified platform for monitoring the crowd and analyzing the mobility data for the crowd,” Dr. Emad Felemban, co-founder of software solutions developer FirstCity told Salaam Gateway.

“Looking at the technology available right now, there is a big gap in the use of big data and AI within the crowd management scope, even though there is a great need for them.”

The idea behind collecting digital resources and applying advanced analytics, said Felemban, is to be able to predict the crowd situation in the near future, where it will be, and what time it may occur.

The prediction will be made possible by the customization and localization that the company has applied to the platform, based on its extensive knowledge of the hajj environment.

“People get confused when they talk about hajj; they think it’s like a large festival or the Olympics or a big football match. In these events, the crowds are usually from similar age groups or backgrounds. But in hajj, we have people from many different backgrounds, cultures, nationalities, and age groups,” said Dr. Faizan Ur Rehman, co-founder and chief technology officer at FirstCity.

Muslims from all over the world perform the hajj. In 2019, 1.86 million pilgrims came from outside Saudi Arabia, 211,003 were Saudis, and 423,376 were non-Saudi nationals residing in the Kingdom, according to data from the General Authority for Statistics.

“To perform hajj, they all need to go to a certain location, at a certain date and time. This means that the crowd of around two million have to move from one place to the other to perform their ritual in a specific manner. This makes hajj totally different from other events,” stressed Rehman.

Because of the uniqueness of the pilgrimage, a technology that is being used elsewhere in the world cannot be directly applied, according to Felemban.

“There is a gap in customization and local context, and this is what makes our solution unique,” said Felemban, who is also a professor in computer engineering at Umm Al-Qura University in Makkah.

In its new crowd management software, FirstCity incorporated a scheduling methodology which has been used for the last 60 years, especially in the transportation sector. The company customized the algorithm to match pilgrims’ needs and preferences while performing the jamarat, the final ritual of the hajj.

“We matched the time and customization of the pilgrimage together along with the current infrastructure available for hajj, and we created a unique scheduling algorithm. Our premise is how to absorb common scientific methods already available and customize them to match the needs of hajj,” said Felemban.

“We know the capacity, the preferences of the pilgrims, the psychology and real-time crowd status. If you put all this into one equation you will be able to predict with a certain accuracy where the congestion will be.”

The platform will also make use of the digital resources that different government agencies have and will add an extra layer of analytics and AI to create information that can be used for decision-making.

FirstCity will now receive the support it needs to accelerate the development of its crowd management solution. Winning the KAUST challenge entitles the company to guidance, mentoring and coaching from airport ground-handler Saudi Ground Services, and it can also pitch its solution to potential sponsors, as well as enroll in the Global Microsoft For Startups Program and the Microsoft Growth X Virtual Accelerator.

FirstCity is by now a pro at developing tech for the pilgrimage, as Felemban and his team have been working on projects for the Ministry of Hajj and Umrah since 2011.

One solution the company developed in 2019, that is currently actively running, is Tafweej, a cloud-based platform that can manage and schedule the movements of pedestrians who are on foot, or on buses and trains, through intelligent optimization algorithms.

The hajj and umrah ministry also uses other solutions that are either developed in-house or by other companies.

One heavily-used app is Eatmarna, that was launched in September 2020 by the ministry in cooperation with the Saudi Data and Artificial Intelligence Authority. The app makes it possible for people to request a permit for umrah during the pandemic period and has so far been used by more than 15 million people.

Another solution that has proven especially successful is the smart card, that was distributed to pilgrims in 2020 after a trial the year before. Its usage will continue to be expanded in 2021, a spokesperson for the Ministry of Hajj and Umrah told Salaam Gateway.

The wearable card stores pilgrims’ personal, medical, and residential information, allowing them to be easily identified. It connects with an app on the pilgrims’ phones, enabling the card to guide them to their residence in holy sites and gives them a way to reach out to their group leader and make special meal requests.

“At the Ministry of Hajj and Umrah, we believe that platforms such as smart cards, electronic tracks, and the Eatmarna mobile app have made the biggest impact in enriching the pilgrims' experience and helped provide them with the needed services,” said the ministry spokesperson.

The smart card played an important role during the 2020 “pandemic hajj”, which was drastically scaled down to 1,000 pilgrims already residing in the kingdom. It allowed the government to quickly access pilgrims’ medical history, monitor their movements, and ensure that mandatory quarantine was observed.

The Ministry of Hajj and Umrah is currently monitoring the pandemic curve to make a decision on the quota for hajj 2021.