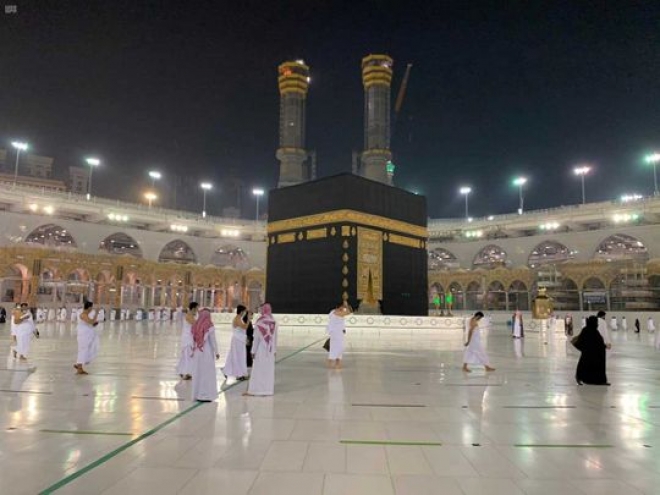 The number of the Muslims who performed the Umrah or minor pilgrimage last year dropped by nearly 70 per cent due to the global COVID-19 pandemic and related restrictions, Saudi media quoted a government statistics agency as saying.

Findings of a 2020 survey on domestic and foreign pilgrims showed that their numbers declined by 69.6 per cent, figures from the Saudi General Authority for Statics said.

The total numbers of Umrah pilgrims last year were 5,822,942, including 66.08 per cent from outside the kingdom and 33.92 per cent domestic pilgrims, according to the figures.

Concerns over the spread of the coronavirus prompted Saudi Arabia in March last year to suspend the Umrah journeys made annually by millions of Muslims around the world, who mostly could not afford the Haj costs.

In October, the kingdom set into motion a plan for gradual resumption of the Umrah amid stringent precautions against COVID-19.

The first phase of the plan, which began on October 4, allowed 6,000 Umrah pilgrims from inside the kingdom per day into the mosque.

The second went into effect on October 18, allowing about 40,000 worshippers and 10,000 pilgrims a day into the site. As many as 20,000 Umrah pilgrims and 60,000 worshipers per day were allowed into the mosque according to the third phase that started in November.

Saudi authorities have increased capacity of the Grand Mosque in Mecca to reach 50,000 Umrah pilgrims and 100,000 worshippers per day in the current holy month of Ramadan, which is usually a peak season for the Umrah.

The ministry of Haj and Umrah announced that only “immunised” people against COVID-19 are permitted to visit the mosque. It has defined the eligible “immunised” worshippers as those who have received two doses of vaccination against COVID-19; those receiving a single dose of inoculation at least 14 days in advance; and those who have recovered from the virus infection.

Permits to get access to the Grand Mosque are obtained via the smartphone apps “Eatmarna” and “Tawakklana”.


⇐ Previous:
More visitors from outside Kingdom expected during last 10 days of Ramadan
Next: ⇒
Our solutions are smart and aim to enrich pilgrims’ experience