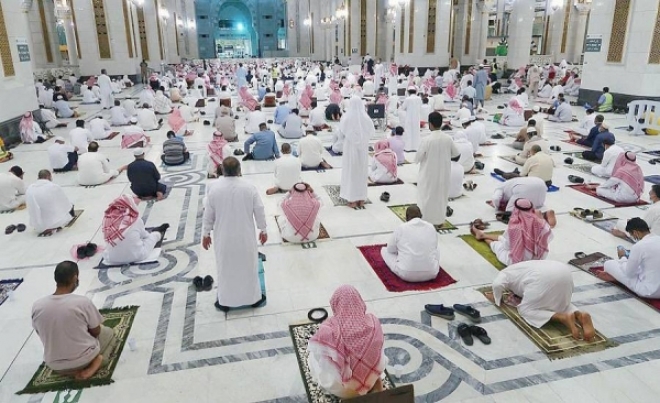 MAKKAH — Worshippers performed the Thajjud prayer (optional night prayer) on the first night of the last 10 nights of the holy month of Ramadan at the Grand Mosque, in the presence of only immune people as shown by the Tawakkalna application with full commitment to health protocols, precautionary measures and preventive procedures followed at the Two Holy Mosques.

The General Presidency for the Affairs of the Grand Mosque and the Prophet's Mosque has organized the entry of worshippers and Umrah performers to the Grand Mosque and its yards through monitors distributed on main and secondary corridors to ensure easy movement and transport and realize requirements of the precautionary measures and preventive procedures inside the Grand Mosque.

The Gate Administrate at the General Presidency has recruited more than 100 gate observers to receive worshippers and direct them to allocated areas.

The Presidency also paid much attention to sterilization, where this process is implemented round the clock by using some 15,000 liters of sterilizers to clean all surfaces and floors, in order to create healthy, epidemic-free environment of praying.

The Presidency prepared more than 45 field teams working round the clock to sterilize all corners of the Grand Mosque and its external yards. It also provided more than 300 modern devices for sterilizing hands and other devices that measure temperatures through remote sensing.

Meanwhile, a number of Umrah performers and worshippers praised the services presented at the Grand Mosque and qualitative leap it has witnessed at all levels, expressing their appreciation for what they found as a safe environment during the holy month of Ramadan.

During interviews with the Saudi Press Agency (SPA), they stressed that these services, presented under a health precautionary system, highlight the prominent role of the Kingdom of Saudi Arabia in serving the Two Holy Mosques through harnessing all possible potentials to serve worshippers and Umrah performers in a healthy and safe environment despite the circumstances imposed by the novel coronavirus (COVID-19) pandemic.

They also commended the development at the Grand Mosque through the qualitative leap in the system of services and mega projects, as well as the comprehensive change at all levels, such as eased access to water, the system of transport and air cooling and allocating the Mataf courtyard for Umrah performers, among other electronic services that benefited all.


⇐ Previous:
Foreign pilgrims, visitors must include COVID-19 coverage in their insurance
Next: ⇒
Our solutions are smart and aim to enrich pilgrims’ experience