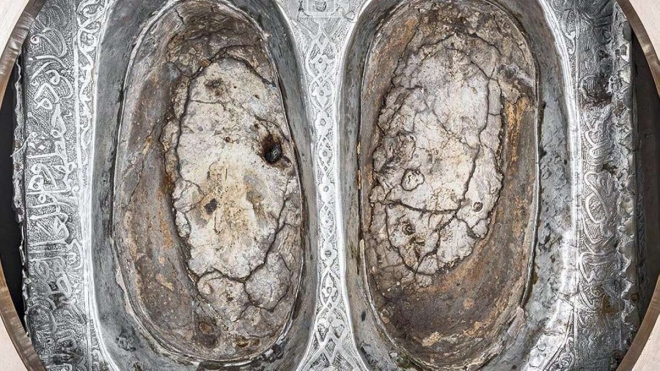 The stone, adjacent to the Kaaba in the holy city of Makkah, is protected by a brass dome and metal casings.

It was photographed by the General Presidency for the Affairs of the Two Holy Mosques using a stacked panoramic focus technique.

Islamic scholars say that the shrine stone and the Black Stone were brought down to Earth from heaven and handed over to Prophet Ibrahim and his son Prophet Ismail to build the Kaaba.

It is believed that Ibrahim stepped on it while he was building Kaaba, leaving his footmarks.

Prophet Mohammed described the shrine’s stone and the Black Stone as "two rubies from Heaven, had God not faded their lights they would have lit the Earth from its east to west" in a clear indication of their sacredness in Islam, according to the two holy mosques Twitter account.

The stone is square and impressions of Ibrahim’s feet are said to be inside its two egg-shaped hollows.

Abbasid Caliph Al Mahdi was the first ruler in Islam to cover the shrine stone with copper, historians say.

During the reign of Caliph Al Mutawakil it was encased in gold and silver to protect it further.

Buildings were removed to make way for the circumambulation rituals that are performed there by many millions of pilgrims.

Crystal glass and silver covers were installed during the process to protect the stone.

The shrine took its current form and was covered with its protective brass mini dome during the during the reign of King Fahd bin Abdulaziz, who also expanded the Grand Mosque.


⇐ Previous:
Occupancy rate of Makkah hotels sees over 30% rise in second half of Ramadan
Next: ⇒
Saudi removes 'Muslims only' signs from highway to Madinah