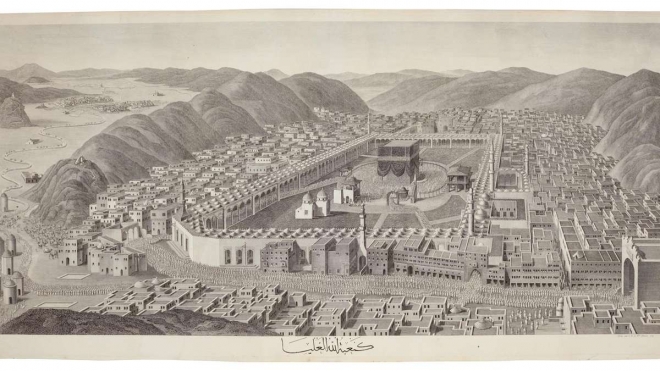 Du Camp’s book is the outcome of a trip to the Middle East in 1849. The French writer ventured to Egypt with novelist Gustave Flaubert, commissioned by the French government to photograph archaeological sites and document the state of commerce and agriculture in various areas.

During his trip, Du Camp took more than 200 photographs of various monuments and sites. A selection of 125 were then included in his book, which garnered huge success during its time. Sotheby’s estimates that no more than 200 copies of the volume were printed, and only a few remain today.

Another rare lot is a large Kaaba engraving from 1791 that shows a sweeping view of Makkah, the centre of the holiest site in Islam, with pilgrims arriving from Mount Arafat for Hajj.

The work was commissioned by a diplomat named Ignatius Mouradgea d'Ohsson and engraved by Berthault after L N de Lespinasse. D’Ohsson later selected engravers and printmakers Charles-Nicolas and Joseph Varin in Paris to create a larger version of the work. The engraving is estimated to sell for £12,000 ($16,718) to £18,000 ($25,000).

The top lot for the sale is a town atlas Civitates orbis terrarum by Georg Braun und Franz Hogenberg. The multi-volume work is sometimes referred to as the "Braun & Hogenberg" and is one of the most celebrated collections of urban cartography, with its plans, maps and aerial drawings of cities across Europe, as well as parts of Asia, Africa and Latin America.

Other prized works include Willem Blaeu’s set of four wall maps that reflect decorative cartography during the Dutch Golden Age, plus two photography albums of Tibet captured by two servicemen during the British Raj.

Ken Shepheard and Archie Jack, part of the Royal Engineers, were officers who served in India and travelled to Tibet to survey possible routes of transport in 1938. The sale includes the photo albums, along with a transcript of Shepheard's diary and notes, plus maps of India, Bhutan, Sikkim and Tibet. It is expected to sell for £40,000 ($55,726) to £60,000 ($83,590).

The auction Travel, Atlases, Maps and Natural History will end on Thursday, May 13.