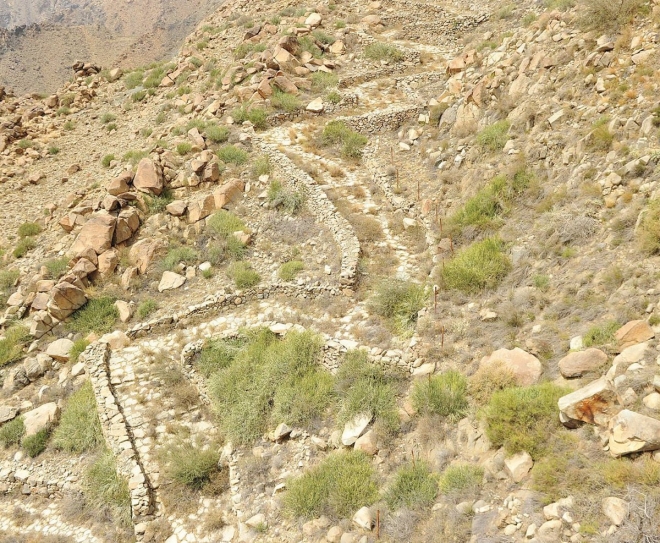 The ancient stone road known as the “caravan route” linking Taif and Makkah is a cultural legacy of great historical value. It was constructed more than 1,000 years ago and was used regularly by pedestrians up to the 1960s.

At the time the road was built, movement between Taif and Makkah was restricted by Al-Qarah Mountain, researcher Hammad Al-Salimi explained. So Hussein bin Salameh ordered the construction of two paths — one for camels and one for pedestrians — to facilitate the exchange and trade of goods in the Kingdom.

The winding road made it possible to cross the mountain and was a remarkable feat of engineering, considering the limited technology available at the time of its creation.

“The roads were paved with stones, which made them resemble staircases winding between the top of the mountain in Al-Hada, the Karr below Al-Qarah Mountain, Shaddad and then Wadi Noman,” Al-Salimi said, adding that a third road, for cars, was built in the mid-1960s, during the reign of King Faisal bin Abdul Aziz Al-Saud.

Al-Salimi said that the two original paths are “important monuments, which should be preserved and maintained because they are part of the Al-Qarah Mountain system and complement the beautiful image of this mountain.”

Historian and writer Saleh Al-Judi explained that — before cars were common in the Kingdom — people would use the route to travel between the two cities, a journey taking around three days. The passage through the mountain, he said, is around six kilometers. In the middle of the route, he added, is a well-known site called Al-Rukb.

He said the route is mentioned in histories from the fifth Hijri century (1009-1106 CE), which say that it had room for pedestrians and animals alike. Al-Qathami stressed the importance of preserving the road as an historical landmark, as it is an important artery linking Taif and Makkah.


⇐ Previous:
Somali PM arrives in Jeddah to perform Umrah
Next: ⇒
Occupancy rate of Makkah hotels sees over 30% rise in second half of Ramadan