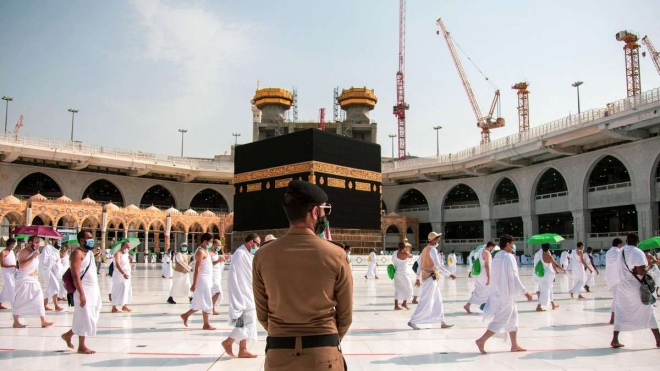 Applications for Hajj permits passed the 450,000 mark in the first 24 hours on Monday, Saudi Arabia’s Ministry of Hajj and Umrah said.

Women made up 40 per cent of the applicants after an announcement that they would be allowed to perform Hajj without a legal male guardian this year.

Only 60,000 slots are available. Applicants must be between 18 and 65 years of age, have received at least one dose of a Covid-19 vaccine at least 14 days before and are free of chronic diseases.

“Those wishing to perform Hajj will have to register individually. Women can register without a mahram [male guardian] along with other women,” the ministry said in a tweet.

In 2019, the Ministry of Hajj and Umrah discussed the idea of allowing women to perform Hajj without a male guardian. The initiative reflects reforms in Saudi Arabia to grant women equal rights and help Muslim women around the world travel for the annual pilgrimage by themselves.

“This is a dream come true! I was ecstatic to see that I could register myself without a mahram, as no one from my family can travel this year due to health and age reasons,” Sania Shaikh, a Saudi resident told The National.

The registration period for Hajj 2021 is from June 13 until June 23 through the official Hajj and Umrah website.

The second phase of registration will begin on June 25, sorting applications by health status.

Once the applicants permits are finalised, they must select and pay for one of three available packages through the website.

The Ministry of Hajj and Umrah said the payment must be made within three hours to avoid cancellation of their Hajj permit.

Deputy minister of Hajj and Umrah Dr Abdulfattah Mashat said children will not be allowed to accompany those on the pilgrimage nor enter the holy sites.

Only those above 18 will be allowed to perform Hajj and that all nationalities can apply through the electronic portal, he said.

Hajj is expected to begin about July 17. Last year, Saudi Arabia limited Hajj to about 1,000 residents because of the pandemic.

Nearly 2.5 million pilgrims performed Hajj in 2019, the year before the pandemic began.