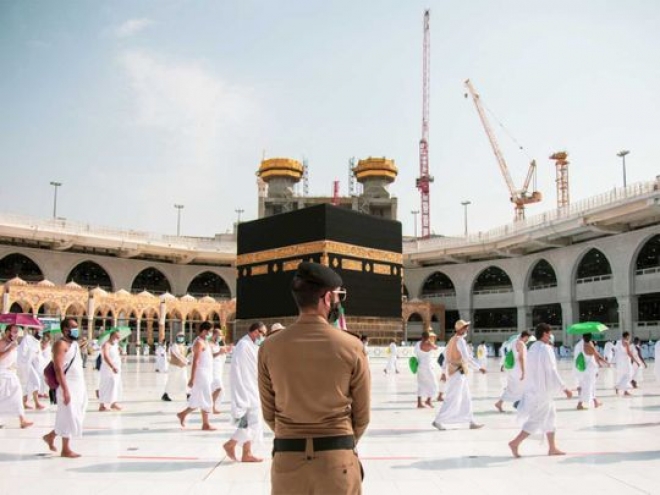 Hani Ali Al Amir, Member of the National Committee for Haj and Umrah, added an area of 4 square metres will be allocated to each pilgrim in the hospitality package in the Mina camps.

The Ministry of Haj and Umrah has allocated six towers and 70 camps to accommodate pilgrims in Mina for Haj this year, which will begin mid-July.

Haj pilgrims, aged 18 to 65 years, should be fully vaccinated, or those who took one dose of the COVID-19 vaccine at least 14 days before, or those who are vaccinated after recovering from coronavirus infection.

Al Amir pointed out that security guards will be assigned to organise the process of pilgrims entering and leaving camps and towers, as well as applying visual and thermal screening procedures while they are in Mina on the day of Tarwiyah (Dhu Al Hijjah 8, when pilgrims begin their Haj at the Kaaba) and the three days of Tashreeq (Dhu Al Hijjah 11-13, when pilgrims tend to stay in Mina to stone the three sites of the devil each day to cement their intentions and in the hope that Allah will accept their Haj).

The arrangement comes out of Saudi Arabia’s constant concern for the health, safety and security of pilgrims as well as the safety of their countries, Al Amir said.

In last year’s Haj, as few as 10,000 people already living in Saudi Arabia were selected to take part in the pilgrimage. Two-thirds were foreign residents from among the 160 different nationalities that would have normally been represented at the Haj. One-third were Saudi security personnel and medical staff.

Each year, more than 2 million Muslims perform the Haj, a physically demanding and often costly pilgrimage that draws the faithful from around the world. The Haj, required of all able-bodied Muslims to perform once in their lifetime, is seen as a chance to wipe clean past sins and bring about greater humility and unity among Muslims.


⇐ Previous:
Quba Mosque is open to worshipers round the clock after COVID-19 restrictions eased
Next: ⇒
Egypt to launch portal for Umrah pilgrimage to end brokerage