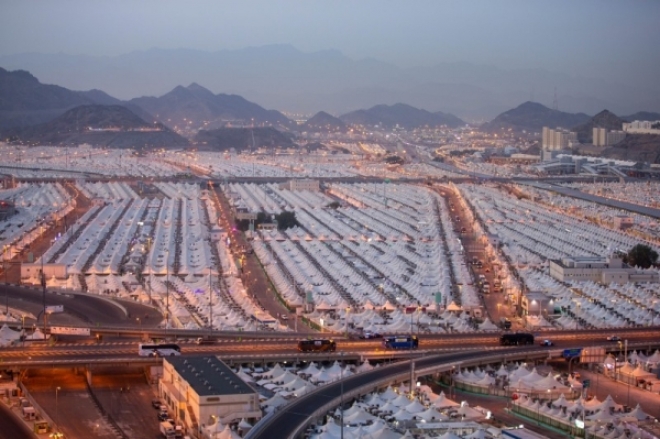 MINA — Marking the beginning of the annual pilgrimage of Hajj on Sunday, a total of 60,000 pilgrims have started their lifetime spiritual journey by converging on the tent city of Mina since morning.

Chanting the talbiyah “Labbaik Allahumma Labbaik (O God, here I am answering your call)...,” the men pilgrims, in seamless white ihram clothes and women pilgrims in abayas, streamed into the enormous tent city, located 7 km northeast of the Grand Mosque.

The tent city is reverberating with the talbiyah of pilgrims who make final preparations for their standing (wuqoof) on the plains of Arafat on Monday, marking the climax of Hajj. The Saudi authorities have readied a meticulously designed and flawless operation plan for the movement of pilgrims to Arafat.

The pilgrims, following the tradition of Prophet Muhammad (peace be upon him), will spend today, called Tarwiyah Day, engaged in supplications for the expiation of their sins. They pray Dhuhr, Asr, Maghreb, and Isha shortening their four-unit prayers so as to make them two units each, without combining them. The pilgrims spend the night of the Tarwiyah Day in Mina. After performing the dawn (Fajr) prayer on Monday, Dhul Hijjah 9, pilgrims move toward Arafat chanting the talbiyah and takbeer (glorifying Allah). In Arafat, they offer Dhuhr and Asr prayers together at the time of Dhuhr, shortening each one into two units.

Prior to heading to Mina to embark on their spiritual journey, pilgrims entered the state of ihram, where they prepare themselves spiritually and don special white seamless garments. They then reached Makkah and performed Tawaf Al-Qudum (Tawaf of Arrival), marking the beginning of the rituals and then they performed the ritual of sa’i between Safa and Marwah, one of the pillars of Hajj.

The Royal Commission for Makkah City and Holy Sites, represented by Kidana Development Company, had allocated the western yard of the Jamarat facility in Mina to receive pilgrims upon their arrival after performing Tawaf Al-Qudum.

Pilgrims are then directed to the buses designated for each category, and they are transported to their places of residence in the tent city. In the grouping area, Kidana made available shades to protect pilgrims from the sun, apart from signboards and four main gates for buses designated to various camps. Each gate bears the color of the tents so that pilgrims can identify them in an easier way. There are a total of 3,000 buses to transport pilgrims, and each bus carries only 20 pilgrims.

Pilgrims started arriving in Mina in the early hours of Sunday itself. The Ministry of Hajj and Umrah has allocated six residential towers and 70 camps to accommodate pilgrims in Mina, and that is strictly in compliance with the precautionary measures and preventive protocols against coronavirus.

A total of 60,000 Saudis and expatriates have been selected from among 558,000 applicants to perform the pilgrimage this year, as compared to about 2.5 million pilgrims who performed the pilgrimage in 2019 before the outbreak of the pandemic. This year’s Hajj is limited to pilgrims, between the ages of 18 and 65 years, and who do not have chronic diseases. Last year, Saudi Arabia organized the smallest pilgrimage in terms of the number of participants in modern history.

The Ministry of Hajj has introduced for the first time Hajj smart cards and smart bracelets that would enable the pilgrims to reach their tents at the holy sites and hotels in Makkah with the minimum possible human contact and facilitate their transportation in the holy sites. The card will also help in tracing any pilgrim in the event of losing contact with him. The authorities also started using black and white robots to distribute bottles of Zamzam water among pilgrims so as to ensure social distancing.