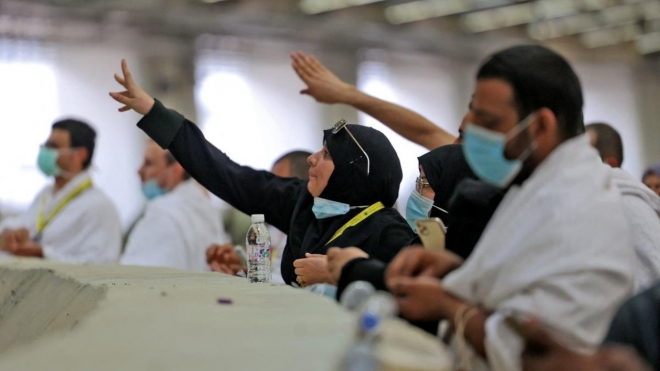 Muslim pilgrims cast sanitised pebbles Monday as they took part in the "stoning of the devil", the last major ritual of this year's hajj which is again under tight coronavirus restrictions.

From first light, small groups of pilgrims made their way across the Valley of Mina near Mecca in western Saudi Arabia to symbolically "humiliate" the devil at the Jamrah al-Aqaba mosque.

Wearing masks and the ihram, the pilgrim's seamless white garment, they each threw seven stones at a pillar symbolising Satan, taking them from sealed bags provided by the authorities.

"All my life I dreamt of going on the hajj, and I still can't believe that the dream has come true," 38-year-old Syrian pilgrim Lina told AFP, describing it as "the happiest day of my life".

The stoning ritual has in past years led to deadly stampedes, as millions of participants converge on a tight space.

But the pandemic has for a second year forced Saudi authorities to dramatically downsize the hajj and just 60,000 fully vaccinated citizens and residents of the kingdom are taking part -- up from 10,000 last year.

"From the beginning, our priority has been the safety of pilgrims, and for this reason we decided to limit their numbers to 60,000 to ensure that the precautions are enforced and everyone is safe," Saudi Health Minister Tawfiq Al Rabiah told AFP.

"We are monitoring the situation continuously," he said late Monday, adding that not a single case of coronavirus had been detected so far among pilgrims.

The hajj, one of the five pillars of Islam and a must for able-bodied Muslims who have the means at least once in their lifetime, is usually one of the world's largest religious gatherings, with 2.5 million taking part in 2019.

Hosting the pilgrimage is a matter of prestige for Saudi rulers, for whom the custodianship of Islam's holiest sites is their most powerful source of political legitimacy.

But barring overseas pilgrims has caused deep disappointment among Muslims worldwide, who typically save for years to take part.

"If we can guarantee that there will be full control (of Covid) and ensure the safety of pilgrims too, which is a priority for the kingdom and its leaders, the hajj can happen again in the future as it was before," the health minister said.

After the stoning ritual, pilgrims return to the Grand Mosque in Mecca to perform a final "tawaf" or circling of the Kaaba.

The Kaaba is a cubic structure that is the focal point of Islam and draped in a gold-embroidered black cloth.

This year's hajj is being held at a time when new variants of the virus are causing global concern. Saudi Arabia has recorded more than 510,000 cases of coronavirus including 8,089 deaths.

The participants were chosen in a lottery among 558,000 Saudi residents and nationals, who had to be between 18 and 65 years old, vaccinated and free of chronic diseases. All the workers mobilised for the hajj have been fully vaccinated as well, authorities say.

Saudi Arabia's King Salman said Monday in a televised speech that "the kingdom's efforts to limit the effects of the coronavirus have been successful."

The strict preventive measures "have enabled pilgrims to perform the hajj," he added.