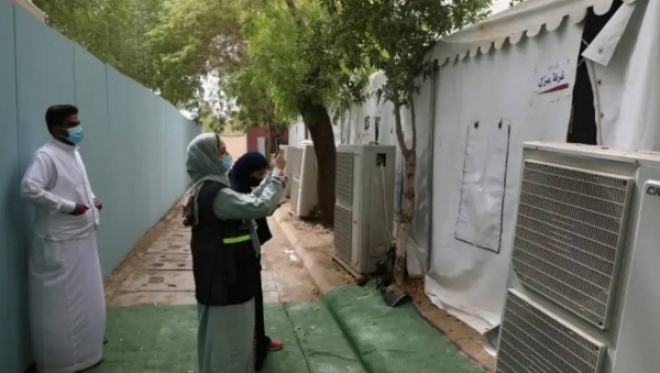 MUZDALIFAH — Acting Minister of Hajj and Umrah Essam Bin Saad Bin Saeed and Chief Executive Officer of the Royal Commission for Makkah City and Holy Sites Abdulrahman F. Addas inspected temporary camps of pilgrims in Arafat and Muzdalifah, on the outskirts of Makkah, on Monday to get reassured of their safety and comfort as per the plans.

During the tour, pilgrims’ observations and complaints received by the Complaints and Reporting Center were taken up and decisions were taken on the spot to address them and refer the follow-up reports to supervisory authorities.

The Ministry of Hajj and Umrah noted that such inspection tours have been made since the arrival of the first contingents of pilgrims in the city of Makkah, valleys of Mina, Arafat, and now Muzdalifah and back again to Mina and Makkah to ensure the safety and comfort of the guests of Allah.

The ministry confirmed that these inspection tours are part of the efforts of those in charge of the Ministry of Hajj and Umrah and the Royal Commission for Makkah and the Holy Sites monitor the services being provided to the pilgrims and assess the preparedness of the personnel and facilities to ensure the application of precautionary measures and provision of services during the various stages of the Hajj season.