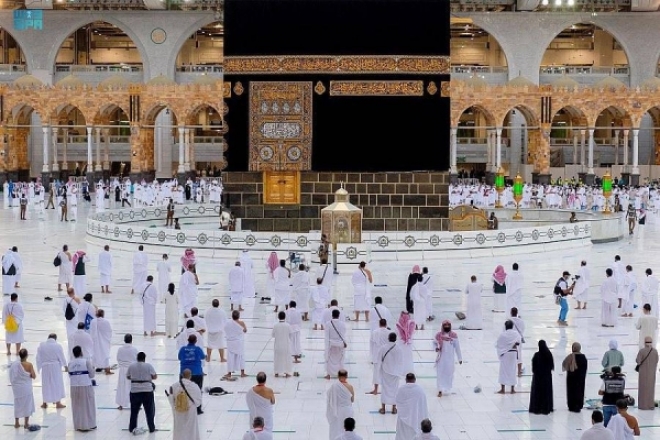 MINA — Pilgrims performed four main rituals of Hajj on Tuesday, Dhul Hijjah 10, which is also known as Yaum Al-Nahr or the Day of Sacrifice.

After reaching Mina from Muzdalifah this morning, they performed the ritual of stoning at Jamarat and then proceeded to Makkah to perform Tawaf Al-Ifadah and sai’ at a time when most Muslims other than pilgrims all over the world started celebrating Eid Al-Adha festival.

Maj. Gen. Mohammed Al-Bassami, the commander of the Special Security Forces for Hajj and Umrah, said that the plans to send the Guests of God to perform Tawaf Al-Ifadah are going on in accordance with the approved strategy for this year’s Hajj.

Since the dawn on Tuesday, pilgrims started arriving in Mina after performing their Wuquf (standing) at Arafat, the most important ritual of Haj, the previous day, and overnight staying in Muzdalifah in an atmosphere full of spirituality with total compliance of coronavirus preventive protocols.

At Mina, pilgrims performed the stoning ritual at Jamarat Al-Aqba (the biggest pillar symbolizing Satan). They used seven sterilized pebbles that were provided to them in wrapped bags for the ritual.

They then sacrificed animals, and thus had a partial exit (first tahallul) from the state of ihram by shaving or cutting hair for men while women trim the length of a fingertip from one strand of hair. They then wear normal clothing after removing ihram.

Pilgrims, then, proceeded to Makkah to perform Tawaf Al-Ifadah and sai’ (ritual of running between Safa and Marwah), two other pillars of Haj. Those pilgrims who performed sai’ along with Tawaful Qudum (tawaf of arrival) need not perform it again.

The General Presidency for the Affairs of the Two Holy Mosques and other concerned authorities managed the entry of pilgrims to the Grand Mosque through specific doors for each group of pilgrims under strict coronavirus preventive protocols.

With the performance of tawaf and sai’, pilgrims would exit completely from the state of ihram. In the remaining two or three days of Hajj, which are known as Ayyamu Tashreeq or Tashreeq Days, the only ritual to be performed is stoning at each of the three Jamarat (Jamarat Al-Sughra, Jamarat Al-Wusta and Jamarat Al-Aqba) seven times after staying overnight in Mina.

On Tuesday Prince Khaled Al-Faisal, emir of Makkah and advisor to Custodian of the Two Holy Mosques, and Prince Badr Bin Sultan, deputy emir, made an inspection tour of a number of facilities to make an on the spot assessment of the services being provided to the pilgrims in Mina.

The tour covered the Command and Control Center of the Ministry of Health at Mina Emergency Hospital where they were received by Minister of Health Dr. Tawfiq Al-Rabiah. The minister briefed the emir on the overall health status of the pilgrims and the services provided to them. Al-Rabiah also highlighted the role of the center, which acts as a link among various departments.

Makkah Mayor Eng. Muhammad Al-Quwaihes on Tuesday visited the Jamarat complex to follow up the fieldwork to maintain public cleanliness and environmental sanitation. He also inspected the slaughterhouses in Al-Muaisem and followed up the process of slaughtering the sacrificial animals.

No coronavirus among pilgrims

Dr. Mohammad Al-Abdel Ali, the spokesman of the Ministry of Health, said that the health condition of pilgrims is reassuring, as no cases of coronavirus or any other diseases affecting public health have been registered among the pilgrims. There were also no deaths reported among them.

Addressing a press conference in Mina, the spokesman underlined that the presence of a high number of people requires a more cautious approach than usual to take preventive and health measures, citing the recent World Health Organization’s praise of the Kingdom with regard to its level of readiness and ability to manage this year’s Hajj.

On his part, Hisham Bin Saeed, spokesman of the Ministry of Hajj and Umrah, said that 18 pilgrims were hospitalized, including seven in intensive care units. There were a total of 17 cases of heat stress, and performance of five successful cardiac catheterization operations.

He said that a total of 485 pilgrims sought medical assistance at clinics while 188 others had undergone checks at the emergency units. For his part, Ministry of Interior Spokesman Col. Talal Al-Shalhoub stated that the authorities have spotted and apprehended several violators of Hajj regulations who tried to illegally enter the holy sites without a Hajj permit.

Meanwhile, the National Center of Meteorology (NCM) said weather in Makkah on Tuesday would be partly cloudy, and there is a possibility for thunderstorms at the holy sites.

According to NCM, the temperature in Makkah and Muzdalifah is 31-degree Celsius while it is 32-degree Celsius in Mina. There is also a possibility for the wind blowing at a speed of 32-12 km/h at night, up to 42 km/h or more.

Ministry of Interior spokesman Col. Talal Al-Shalhoub said that the competent authorities at the holy sites are constantly monitoring the climatic condition and have put plans to deal with any emergency cases that might emerge during Hajj rituals.