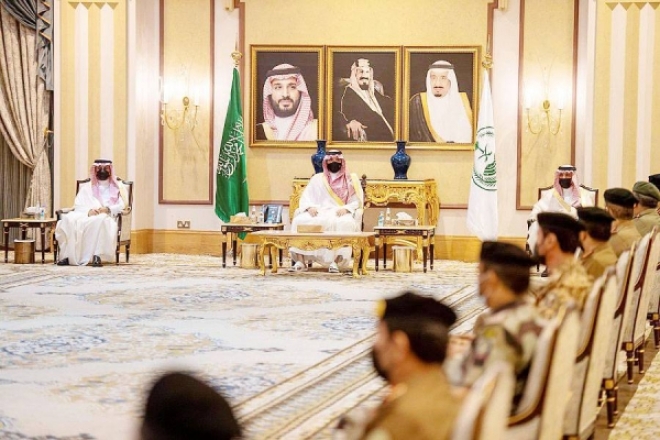 MINA — Minister of Interior Prince Abdulaziz Bin Saud Bin Naif, who is also chairman of the Supreme Hajj Committee, offered the greetings of Custodian of the Two Holy Mosques King Salman and Crown Prince Muhammad Bin Salman to the security personnel from the Ministry of Interior and the Presidency of State Security who participated in implementing Hajj security plans on the occasion of Eid Al-Adha, and the success of the Hajj security plans.

During his meeting with directors of the security sectors and commanders of the Hajj security forces in Mina on Tuesday, the minister expressed his pride in the great efforts made by all security men and their colleagues from the Presidency of State Security and civil authorities participating in the Hajj operation.

He praised the commendable efforts made by all ministries and other agencies in making the Hajj operation a resounding success.

“What I witnessed from the compliance of the pilgrims with the regulations and instructions related to the precautionary measures have contributed to maintaining their safety and facilitating the performance of their rituals in safety and tranquility.”

The minister noted the efforts being made to serve the pilgrims in the two holy cities under the direct supervision of Prince Khalid Al-Faisal, emir of Makkah, adviser to Custodian of the Two Holy Mosques and chairman of the Central Hajj Committee, and Prince Faisal Bin Salman, emir of Madinah and chairman of the Hajj Committee in Madinah and their deputies, Prince Saud Bin Khalid Bin Faisal and Prince Badr Bin Sultan respectively.

Prince Abdulaziz also launched a number of electronic services, buildings and mechanisms of the General Directorate of Civil Defense during his visit to the headquarters of the Civil Defense forces participating in the Hajj.