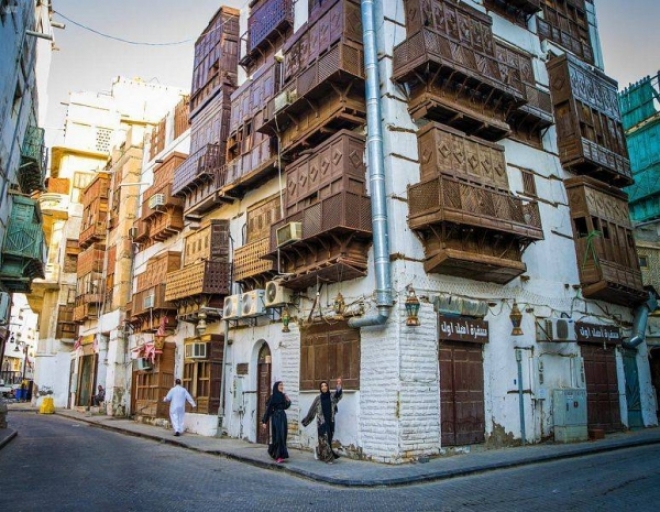 This is within the Historic Jeddah Development Program that aims to develop the living space in the locality to be an attractive center for businesses and cultural projects, as well as a prime destination for aspiring entrepreneurs.

The project comes out of the Crown Prince’s keenness and interest in preserving, safeguarding and rehabilitating historical sites as part of achieving the objectives of the Kingdom’s Vision 2030 as well as to reflect the Kingdom’s Arab and Islamic depth as one of the most important pillars of the Vision.

The project will highlight the heritage features of the region, which is an unparalleled historical site in the Kingdom, as it houses more than 600 heritage buildings, 36 historical mosques, five major historical markets, ancient corridors and squares, and sites with important historical significance such as the old waterfront, which was a major route for the Hajj and Umrah pilgrims.

The revived project will tell visitors to the Historic Jeddah the great story of the arduous journey of pilgrims to perform the annual pilgrimage of Hajj since the dawn of Islam.

The work on the revival project would extend up to 15 years, during which the Historic Jeddah will be developed in accordance with multiple tracks covering infrastructure and services; developing the natural and environmental field; improving the quality of life; and enhancing urban features with the aim of making Historic Jeddah an inspiring destination in the region.

It also aims to make Historic Jeddah a global front for the Kingdom through pumping investments on its heritage sites and its unique cultural and urban elements to build a vibrant area of life where the vast potentials of creativity are available to both its residents and visitors.

The revival project will be based on a modern vision of urban planning in which there will be a combination of the concept of natural conservation and the need to harmonize it with human needs, apart from the catalysts for spontaneous growth of creativity.

The project will be designed in a way making it an incubator for creativity in which Saudi entrepreneurs and artists meet within a creative artistic community, in an environment where the elements of nature and national heritage would have a blending with contemporary engineering designs.

The project aims to create an integrated environment in Historic Jeddah that has multiple natural components, including 5-km-long developed waterfronts, green spaces and open gardens covering 15 percent of the total area of Jeddah’s Al-Balad and within the project area of 2.5 square kilometers.

The project will benefit from these natural components by converting it into elements that support a sustainable healthy environment where the causes of environmental pollution are non-existent.

It is noteworthy that UNESCO, the United Nations cultural agency, had declared the Historical Area in Al-Balad neighborhood of Jeddah a World Heritage site on June 21, 2014.

Historic Jeddah, the Gate to Makkah, is situated on the eastern shore of the Red Sea. From the 7th century AD it was established as a major port for Indian Ocean trade routes, channeling goods to Makkah.

It was also the gateway for pilgrims to Makkah and Madinah who arrived by sea. These twin roles saw the city develop into a thriving multicultural center, characterized by a distinctive architectural tradition.

Al-Balad, founded in the 7th century, was historically served as the center of Jeddah. The Mayoralty of Jeddah began historical preservation efforts in the 1970s.

In 1991 the Mayoralty of Jeddah founded the Jeddah Historical Preservation Society to preserve the historical architecture and culture of Al-Balad. In 2002, $4 million were earmarked for the preservation society.

In order to preserve the old structures within Al-Balad, the Historical Area Preservation Department was established in 1990, hoping also to help promoting cultural tourism in the country.