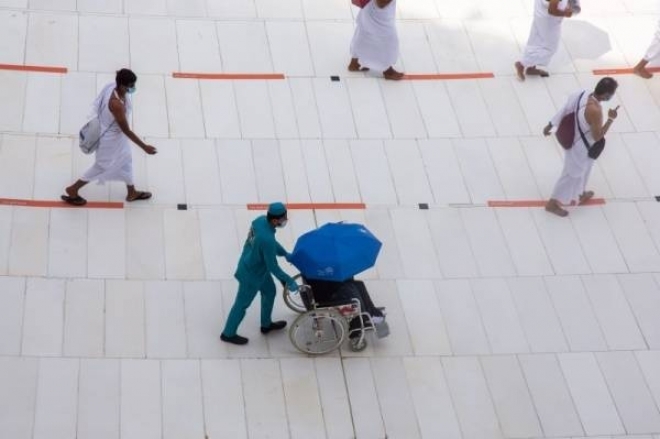 The Ministry of Hajj and Umrah has said that aspiring pilgrims above the age of 70 years within Saudi Arabia will be allowed to perform Umrah on condition that they have received both doses of the vaccine against COVID-19.

Okaz/Saudi Gazette has learned from the ministry sources that elderly pilgrims who are fully immunized can book for appointments to obtain the permit through the Eatmarna and Tawakkalna applications.

Previously, the ministry allowed issuing of Umrah permits only to domestic pilgrims between the ages of 18 and 70 in compliance with the precautionary measures taken by the Ministry of Health. Even fully vaccinated pilgrims above the age of 70 were not allowed to perform Umrah ever since the outbreak of coronavirus early last year.

But recently the ministry announced the expansion of the categories of domestic pilgrims allowed to obtain permits to perform Umrah and prayer in the Grand Mosque by including youngsters between the ages of 12 and 18. This is with the condition that they have received two doses of the coronavirus vaccines and now pilgrims above the age of 70 are also included in the list.

The ministry stressed earlier that the mandatory immunization against COVID-19 is a prerequisite to issue permits to perform the rituals of Umrah or the regular prayer in the Grand Mosque. These included immunization by two doses of vaccine; completing 14 days after taking the first dose; and within six months of the recovery after being infected with the virus. The pilgrims who meet the immunity requirements shall show their status on their Tawakkalna application for getting entry into the Grand Mosque.

The ministry has set an interval of 15 days between the issuance of two Umrah permits for pilgrims of all age groups. A pilgrim, who obtained a permit to perform Umrah, can book an appointment for a second Umrah at the end of the specified 15-day period after the performance of the first Umrah.

The ministry earlier clarified that it was not possible to obtain a permit for prayers at the Grand Mosque for more than 24 hours. However, worshippers could apply for a second permit immediately after the expiry of the validity of the first permit.