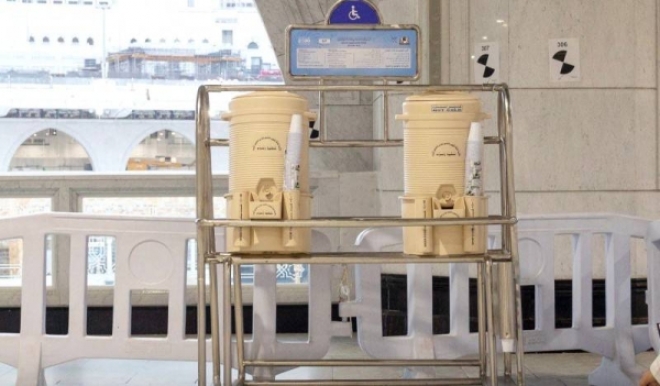 MAKKAH — The Zamzam water containers at fixed marble stations are now available for the pilgrims and worshipers at the Grand Mosque in Makkah after a hiatus of over one and a half years.

The Agency for Services and Field Affairs and Environmental Protection at the General Presidency for the Affairs of the Two Holy Mosques has restored 155 fixed marble stations (mashrabiya) and 20,000 containers for drinking Zamzam water at the Grand Mosque, to serve worshipers and visitors, and that is in total compliance with the precautionary measures against coronavirus.

During the pandemic period, the presidency hired large number of workers to distribute the holy water in sealed, sterilized and single-use bottles in the mataf (circumambulating area around the Holy Kaaba), mas’a (running area between Safa and Marwah), as well as at various locations inside the Grand Mosque.

Muhammad Al-Jabri, deputy head of the Presidency in charge of the Agency for Services and Field Affairs and Environmental Protection, said that the decision to restore mashrabiyas and containers was taken following an increase in the rate of immunization against coronavirus among citizens and expatriates.

This is also in compliance with all precautionary measures and preventive protocols against coronavirus by Umrah pilgrims and visitors to the Grand Mosque.

“A total of 126 officials have been mobilized around the clock to follow up and monitor the entire operation of the Zamzam water distribution at the Grand Mosque. They are also making field tours to drinking stations to ensure their continuous readiness while maintaining the cleanliness of the stations and containers,” he said, adding that these officials also supervise workers who refill the containers.

It is noteworthy that the Zamzam water containers are regularly sterilized and disinfected to ensure the safety of the pilgrims and worshipers.

Director of the Zamzam Watering Department at the Grand Mosque Abdulrahman Al-Zahrani said his department seeks to keep the containers clean and sterilized with the aim of preserving the safety of visitors of the mosque.

The washing process goes through five stages, he said, adding that a specific, fragrance-free soap is used in the cleaning. The stages also include the sterilization, drying and storage.

Lastly, the containers are transferred in specific cars to the filling points at the Grand Mosque. He said the entire operation is carried out inside the mosque complex with the help of special equipment.