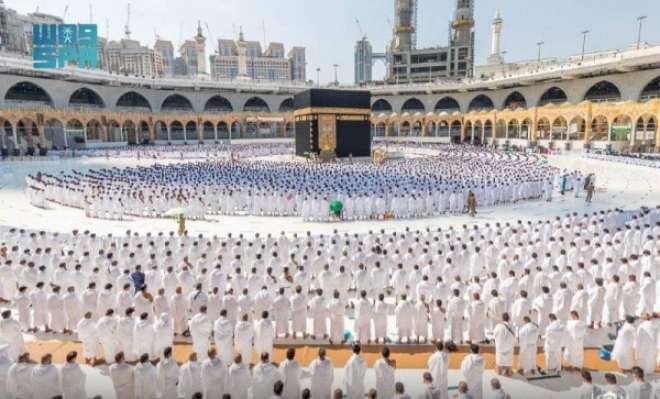 MAKKAH — Worshipers other than Umrah performers will also be allowed soon to perform circumambulation around the Holy Kaaba (tawaf), Okaz/Saudi Gazette has learnt from well-informed sources.

A new icon titled “Tawaf” will be added on the Eatmarna and Tawakkalna applications by the coming weekend to facilitate booking appointment for the performance of tawaf for non-Umrah performers.

This is in line with implementing the recent directive of Custodian of the Two Holy Mosques King Salman to allow using the full capacity of the Grand Mosque for pilgrims and worshipers.

There will be options on the Eatmarna and Tawakkalna applications to book appointment for kissing the Black Stone (Al-Hajar Al-Aswad), touching the Yemeni Corner (Al-Rukn Al-Yamaani), and performing prayer at Hijr Ismail.

The pilgrims and worshippers will be made available of the best ever services and facilities for performing their rituals in ease and comfort.

They will be enabled to take advantage of the enhanced smart applications related to services at the Two Holy Mosques, the sources said, while pointing out that all these will be strictly in line with the compliance of the precautionary measures and preventive protocols to stem the spread of coronavirus.

Commander of the Special Forces for the Security of Hajj and Umrah Maj. Gen. Muhammad Al-Bassami announced that the first floor of the Grand Mosque will be set aside to perform tawaf for non-Umrah pilgrims and the icon for tawaf will be added on the Eatmarna and Tawakkalna applications, according to Al-Ekhbariya channel.

There is cooperation between all the concerned agencies with the Ministry of Hajj and Umrah to activate the Tawaf icon on the Eatmarna and Tawakkalna applications, and it will be available by the end of this week, coinciding with the short vacation at the end of the first semester of education.

Al-Bassami said that preparations are under way to facilitate the first floor of mataf (circumambulation area around the Holy Kaaba) and the Grand Mosque to receive the large numbers of worshipers.

Umrah pilgrims and worshipers are required to wear masks at all times when they are within the Grand Mosque and its courtyards.


⇐ Previous:
Mauritanian president visits prophet's mosque
Next: ⇒
Travel requirements in all countries of world can be checked through Tawakkalna app