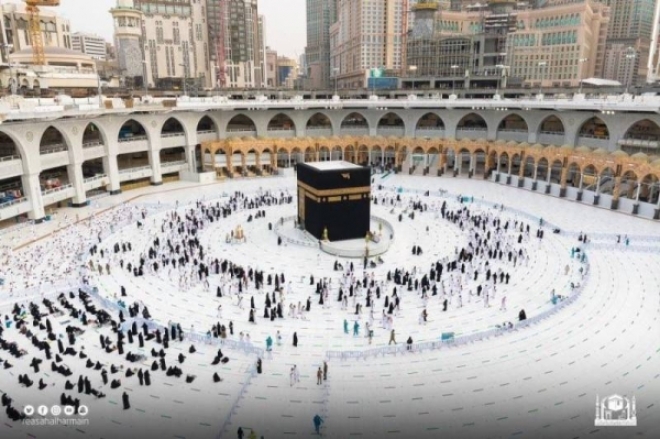 MAKKAH — Custodian of the Two Holy Mosques King Salman has issued orders to allow worshipers other than Umrah performers to perform circumambulation around the Holy Kaaba (tawaf) effective from Thursday, Nov. 25.

A new icon titled “Tawaf” has been added on the Eatmarna application to facilitate booking appointment for the performance of tawaf for non-Umrah performers.

He said that the first floor of the Grand Mosque has been set aside to perform tawaf for non-Umrah pilgrims. The presidency has set three time slots for the performance of tawaf for the worshipers.

“The presidency, in cooperation with the other concerned agencies at the Grand Mosque, has completed preparations to receive worshipers wishing to perform tawaf on the first floor of the Grand Mosque during three periods: from 7:00 to 10:00 in the morning; from 9:00 to 11:59 in the night; and from 12:00 to 3:00 in the early morning,” he said while noting that all services will be rendered to the worshipers including distribution of Zamzam water, continuous sterilization, and facilitating the entry and exit to the first floor of the Grand Mosque.

The Ministry of Hajj and Umrah announced that non-Umrah performers can book appointment for tawaf through the service that was launched on the updated Eatmarna application effective from Thursday.

Haider said that the full capacity of the first floor of the mataf (circumambulating area around the Holy Kaaba) will be used with ensuring the smooth flow of movement and the application of precautionary measures against coronavirus.


⇐ Previous:
Saudi Arabia to issue Umrah permit for all foreign pilgrims aged 18 and above
Next: ⇒
Saudi Arabia allows direct entry from six countries, including India and Pakistan