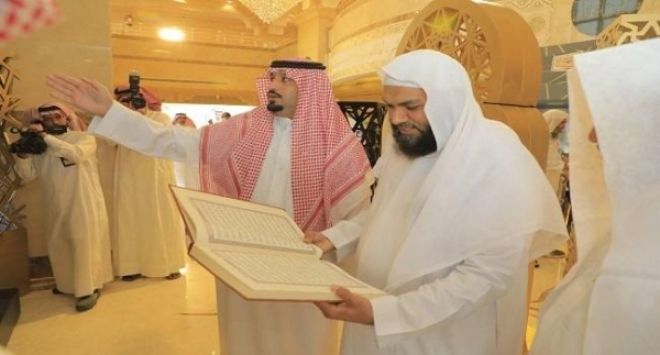 RIYADH — The Ministry of Islamic Affairs, Call and Guidance, represented by the Secretariat General for Exhibitions and Conferences, in cooperation with King Fahd Complex for the Printing of the Holy Qur’an in Madinah, Saturday inaugurated the Holy Qur’an Exhibition that is held at the ministry’s branch in Makkah Region. It will last for 14 days.

Director General of the ministry's branch in Makkah Region Dr. Salem Bin Hajj Al-Khamri said that this exhibition sheds light on the efforts and care of the state in the Holy Qur’an and its efforts in establishing the biggest complex worldwide for the printing of the Holy Qur’an.

Dr. Al-Khamri said that the complex’s production, since its establishment, has exceeded 345 million copies of all issues, which highlights the state’s keenness and care in the Holy Qur’an, where production over the past years stood at around 8 million copies, and now, with a generous support from Custodian of the Two Holy Mosques King Salman, printing of the Holy Qur’an reached 20 million copies annually.

The exhibition aims at enabling its visitors to check on the efforts exerted by the Kingdom of Saudi Arabia in the field of publishing and printing of the Holy Qur’an, and reviews means and technologies of serving the Holy Qur’an, mechanism of its printing and publication, stages of printing and the comprehensive development features that the complex is witnessing.

Also, a collection of the complex’s issue and old manuscripts and modern technologies will be displayed with the aim of delivering a message to Muslims and making them closer to the Holy Qur’an, highlighting the big works of the wise leadership in serving Islam and Muslims, care in the Holy Qur’an and the importance of acquainting the society with them in harmony with the ministry’s message in instilling the values of loyalty to the homeland and its leadership. — SPA