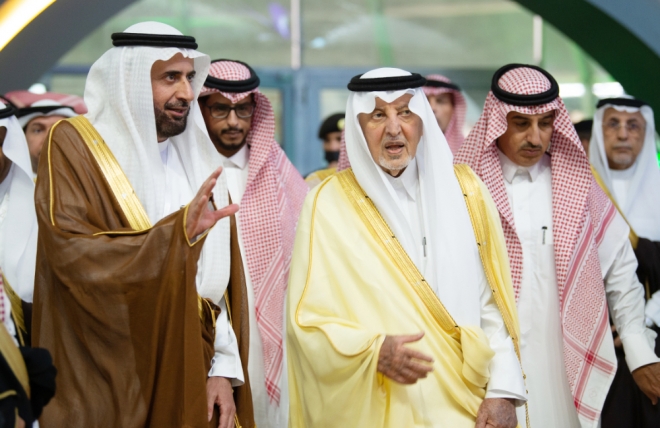 JEDDAH: An international conference and exhibition of Hajj and Umrah services was launched on Monday at Jeddah Superdome by Makkah Gov. Prince Khalid Al-Faisal.

The three-day event, called “Transformation Toward Innovation,” is organized by the Ministry of Hajj and Umrah in collaboration with the Doyof Al Rahman (Guests of Allah) Program.

It is aimed at coming up with recommendations that serve the Hajj and Umrah sector in line with the Kingdom’s Vision 2030.

Dr. Tawfiq Al-Rabiah, minister of Hajj and Umrah, announced the launch of a challenge to involve entrepreneurs in improving the pilgrim experience.

“Doyof Al Rahman is one of the Vision 2030 pillars as it aims to enrich the Hajj experience. We seek creativity and innovation through cooperation with all government and private sectors to achieve these goals,” he told the conference.

“We support the creative initiatives from young entrepreneurs that would help to achieve our goals, so we launched the Hajj and Umrah Challenge, which aims to collect and implement creative ideas. Over the past 48 hours, more than 1,500 people from all over the Kingdom have applied to this platform.”

The challenge will be in two stages.

The first is a Hajj Creative Hackathon, which will last for three days and seeks to bring doable creative solutions to Hajj services. Winners will receive awards of around SR150,000 (around $40,000).

The second stage targets entrepreneurs and innovators across the Kingdom. They will participate through The Open Innovation Platform to share suggestions and ideas for three months.

This stage will be punctuated by several courses and workshops aimed at bringing more startups and entrepreneurial projects into the Hajj and Umrah sector. These small businesses are to be incubated and supported by the ministry and the Small and Medium Enterprises General Authority (Monsha’at).

Al-Rabiah said: “I hope to come out of this conference with distinguished creative ideas that will achieve the desired goals and more.”

The first day of the conference included three sessions from leading speakers, experts, and academics from the Hajj and Umrah sector, in addition to the presence of 30 ministers from around the Islamic world.

The three sessions were: Transformation toward innovation and technology, designing and improving the digital experience in the service of the pilgrims, and innovation and pioneering actions in Hajj services.

The speakers in the first session were Ibrahim A. Al-Omar, director general of Saudia Airlines, Col. General Suliman Al-Yahya, general director of passports, Abdulrahman Addas, CEO of the Royal Commission for Makkah City and Holy Sites and CEO of the Pilgrim Experience Program, and Al-Rabiah.

As Vision 2030 wants to receive 30 million pilgrims, Al-Omar explained how Saudia was preparing to accommodate such a large number.

“That is absolutely doable, and we will implement it by increasing the fleet, increasing direct destinations, and by activating Jeddah airport to be a hub for transit traffic.

“Today we have 144 aircraft and after three years we will add another 38 planes, and this will be reflected in the annual seat capacity of Saudia Airlines. The average number of seats will become 50 million, forming 36 percent as an approximate increase in capacity.”

With direct flights being key to facilitating Umrah visits for international pilgrims, Saudia announced 10 new direct routes to bring this total to 105.

Al-Yahya spoke about the Hajj permit issue procedure and how it could be carried out in the pilgrim’s home country.

“Now, Hajj and Umrah visas are done by fingerprint, and this service is provided in five countries: Malaysia, Indonesia, Pakistan, Bangladesh, and Tunisia. So far, it has served more than 277,000 pilgrims since 2017.”

COVID-19 had a huge impact on Hajj and Umrah, especially in terms of capacity and access, but the Kingdom developed apps in response to the pandemic whose use extends beyond healthcare.

“The application contributed to creating easier entry to the Two Holy Mosques. It helped identify visitors, giving more room for those who still did not get access. It also enabled us to collect and analyze data and set priorities.”

During the conference, the ministry signed partnerships with the Saleh Abdullah Kamel Humanitarian Foundation, Flynas, Saudia, and the General Authority for Awqaf.

The agreements seek to monitor the needs of pilgrims during Hajj, designing and developing products, programs, and projects for pilgrims, developing the capabilities of nonprofit organizations working in Hajj services, and activating the nonprofit sector to monitor its efforts in serving pilgrims.

The speakers at the second session were: Dr. Abdulfattah Mashat, vice minister of Hajj and Umrah, Mohammed Al-Bassami, general commander of the Hajj Security Forces, Abdelmoneim Al-Mahmoud, ambassador plenipotentiary for the Ministry of Foreign Affairs, Abdullah M. Al-Issa, CEO of Tawakkalna, and Hani A. Dahhan, executive vice president for guest experience in the Pilgrim Experience Program.

Saudi Arabia has developed technology for Hajj and Umrah services, including a Hajj smart card launched last year, and Mashat said there were two main goals that the ministry wanted to achieve.

“Receiving a bigger number of pilgrims and improving the Hajj experience,” he told the conference. "We want to provide pilgrims with an unforgettable spiritual experience with no interruptions. To do that, we are aiming to harness technology and make it a cornerstone of most of our services."

An exhibition on the sidelines of the conference saw the presentation of programs, products, and projects from those working in Hajj and Umrah-related sectors.

The conference will also review the best innovative and effective ideas on topics compatible with the future of the Two Holy Mosques, such as smart cities and building special development zones, through the Hajj Talk platform.

There were also two workshops on the first day of the conference: The art of dealing with pilgrims and design thinking in the field of Hajj and Umrah.

Locals and entrepreneurs are welcome to attend the conference, with tickets available at ticketMX.com.


⇐ Previous:
Makkah historical sites to get private sector facelift
Next: ⇒
Saudia Airlines signs MoU with the Ministry of Hajj and Umrah