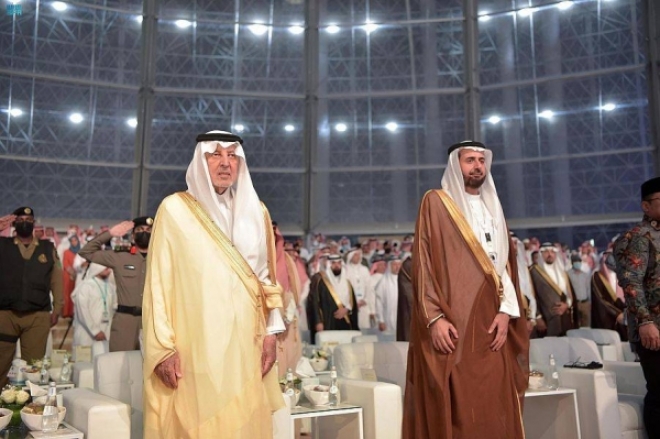 JEDDAH — Prince Khaled Al-Faisal, Advisor to the Custodian of the Two Holy Mosques and Governor of Makkah region, on Monday attended the launching of the Conference and Exhibition of Hajj and Umrah Services titled “Transformation toward Innovation” at the Jeddah Superdome. The event is organized by the Ministry of Hajj and Umrah in cooperation with the Doyof Al-Rahman Program, which is one of the executive programs of the Saudi Vision 2030.

Upon his arrival at the location, Prince Khaled toured the exhibition accompanying the conference.

Minister of Hajj and Umrah Dr. Tawfiq bin Fouzan Al-Rabeeah started the ceremony with welcoming Prince Khaled’s patronage of the events, which aim at shedding light on achievements of digital transformation in the ministry as part of its efforts in realizing the Saudi Vision 2030, in the presence of ministers of more than 20 countries.

He said: “All targets are meant to realize one goal that has always been the top interest of our wise leadership, which is to ensure that pilgrims and Umrah performers complete their visit and rituals with ease, comfort and tranquility.”

Dr. Al-Rabeeah added: “The accelerating and modern steps that the Hajj and Umrah system is witnessing over the past few years would not have been realized without having a prepared and advanced environment that was seen in several mega projects.”

He also noted that the latest projects are considered a bright addition to a strong and profound infrastructure that Saudi Arabia has established throughout its blessed journey in serving pilgrims and Umrah performers since the reign of the founder King Abdulaziz bin Abdulrahman Al Saud. He said since the launch of the ambitious Saudi Vision 2030 during the reign of Custodian of the Two Holy Mosques King Salman and His Royal Highness the Crown Prince, these steps have made unprecedented progress in serving pilgrims and Umrah performers in all fields.

Later on, a visual presentation was displayed on Saudi Arabia’s honor to serve pilgrims, Umrah performers and visitors of the Two Holy Mosques with the full support of the wise leadership and providing the suitable atmosphere to perform rituals in an atmosphere of tranquility, in addition to shedding light on the smart Hajj system according to the Saudi Vision 2030.

After that, Prince Khaled Al-Faisal inaugurated the “Hajj and Umrah Challenge” initiative and witnessed the signing of a number of agreements between the Ministry of Hajj and Umrah and several institutions. — SPA