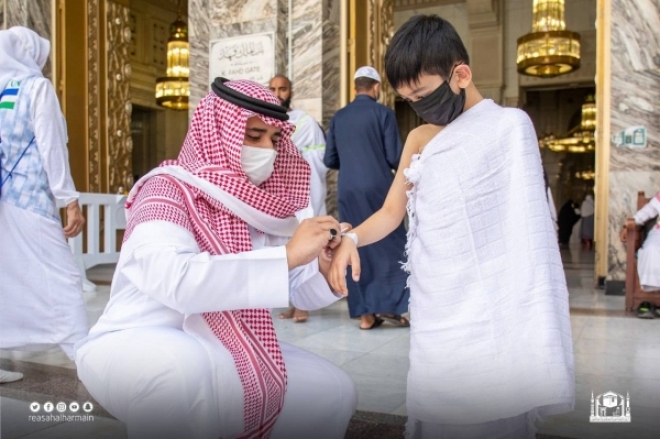 MAKKAH - The General Presidency for the Affairs of the Two Holy Mosques announced on Tuesday that it launched an initiative to distribute bracelets among children who are accompanying their parents to perform Umrah in order to avoid the prospect of getting lost in crowds at the Grand Mosque.

The presidency’s initiative comes in the wake of an expected huge flow of Umrah pilgrims from within the Kingdom and abroad during the upcoming holy month of Ramadan, the peak annual Umrah season.

The Presidency was represented by the Young Visitor Service Department in implementing the initiative titled “Your Child is Safe with Us” as part of the presidency’s social responsibility program.

The department staff will be deployed in the entire premises of the Grand Mosque to distribute bracelets.

“This is out of the presidency’s utmost keenness on the provision of the finest and best services for the pilgrims with the new service for children to take care of their safety and comfort,” said Eng. Amjad Al-Hazmi, deputy head of the presidency for social and voluntary services.

He said that the department is keen to raise the level of social responsibility and enhance the quality of services being rendered to pilgrims and visitors at the Grand Mosque.