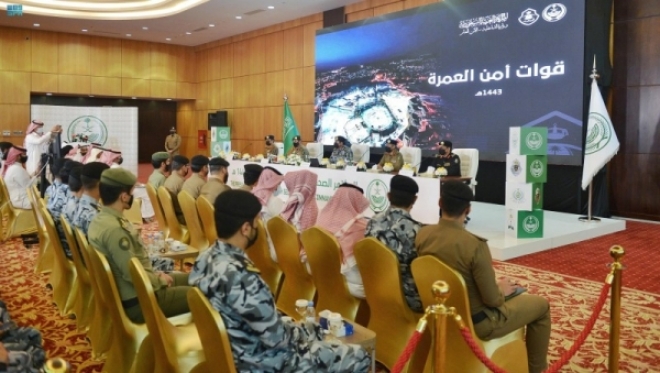 MAKKAH — Maj. Gen. Muhammad Al-Bassami, commander of the Umrah Security Forces, said that there has been integration with all partners to ensure a successful Umrah season during the holy month of Ramadan.

He said that wearing masks in the central Haram area will be strictly enforced. “All the plans that were implemented in the past years have been studied and evaluated with regard to implementation of Umrah plan during Ramadan,” he said while addressing a press conference of the commanders of the Umrah security forces in Makkah.

Al-Bassami said that the mataf (circumambulating area around the Holy Kaaba) and the ground floor of the Grand Mosque will be allocated for the Umrah pilgrims. The gates of King Abdulaziz, King Fahd, Umrah and Al-Salam, and Al-Marwah entry gate are also set aside for the entry of pilgrims.

He stressed that the condition that Umrah performers need to have a permit to perform the ritual is aimed at regulating the crowd management while those who come to perform prayer can enter without a permit. The Ramadan plan of security forces include various aspects including security, public order, crowd management, traffic control, providing humanitarian services, empowering and supporting security agencies and other supportive services. He stressed that wearing mask in the central Haram area is aimed at preserving the health of pilgrims and is in line with the instructions issued by the health authorities.

Al-Bassami said there will be passages on the Third Saudi Expansion Area to facilitate the movement of pilgrims after completion of Umrah pilgrimage from Marwah to the Grand Mosque’s western side of Shobaika, and southern sides of Jabal Omar and Ibrahim Al-Khalil Street.

Addressing the press conference, Maj. Gen. Salman Al-Jomai, assistant commander of the Umrah Security Forces for traffic affairs, said that five screening and control points have been arranged to receive visitors and pilgrims at the entrances to Makkah, and that unauthorized vehicles would be sent back.

On his part, Maj. Gen. Ali Al-Qahtani, assistant commander of the Umrah Security Forces for security patrols, stressed that beggars will be arrested if anybody practices it in the Two Holy Mosques, without complacency, and stringent legal procedures will be taken against them. He said that the patrol teams will monitor compliance of wearing masks by the faithful during prayer times at the Two Holy Mosques, and that smart devices will be used to facilitate the entry of pilgrims.


⇐ Previous:
Ramadan rituals’ welcome return in Makkah and Madinah after two years
Next: ⇒
Hajj management for pilgrims from Bangladesh will be better