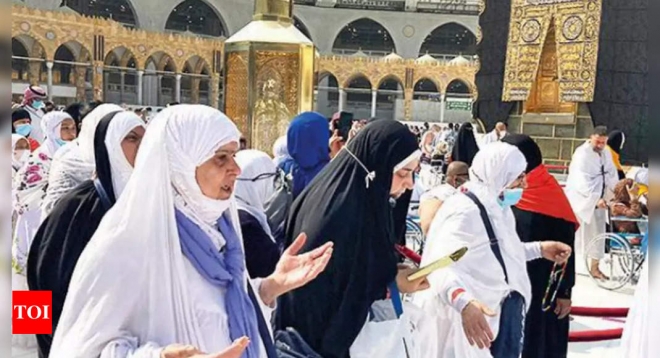 MUMBAI: Having been forced to skip Umrah in Ramzan in the last two years due to the pandemic, many affluent Muslims in the city are rushing to Mecca to perform Umrah during the holy month.

Undeterred by steep rise in cost of visas, tickets and accommodation in Mecca and Medina, some affluent pilgrims are desperate to spend some days at Islam’s holiest shrines. Mumbai resident and Congress leader Mudassar Patel, along with his mother, reached Mecca a few days ahead of the beginning of Ramzan on Sunday. “I feel fortunate to have accompanied my mother who wished to perform Umrah. After seeing so many deaths and much distress in the last two years, this is a great relief not only for us but the world tourism industry. It will help the Indian economy as tour operators and airlines are getting good business,” Patel said on phone from Mecca.

Yusuf Ahmed Khereda of Al Khalid Tours and Travels said that bookings picked up as Ramzan neared. “Initially it was slow, but in the last week or so we saw many bookings despite the increase in overall cost of Umrah,” he said. “Airfares, visas and hotel rooms are costlier than what they were in 2019. If the average cost of one person’s Umrah in Ramzan was Rs 1.3 lakh in 2019, it is between Rs 1.7 lakh and Rs 2 lakh this year.”

Ex-chairman of All India Haj Umrah Tour Organisers’ Association Ibrahim Kolsawala (Baba Bhai) said there is a shortage of hotel rooms in Mecca and Medina as many hotels which were shut during the pandemic have not reopened yet. “It is an issue of more demand and less supply. The few hotels available have hiked their prices as more and more pilgrims move to Mecca and Medina,” he said.

Afzal Patel of Atlas Tours and Travels is enthused that religious tourism has picked up post-pandemic. “It is good that so many pilgrims are performing Umrah in the blessed month of Ramzan,” said Afzal Patel.

There is a belief that Umrah performed in Ramzan is like Haj performed with the Prophet. “There are so many blessings to be had by performing Umrah in this month. No wonder there is so much rush for this, ” said Imran Alvi of Alvi Tours and Travels.
While Haj is performed at a specific time in a year, Umrah can be performed throughout the year. Visiting Medina for Haj and Umrah pilgrims is not mandatory but they visit Medina as Prophet Muhammad is buried there.