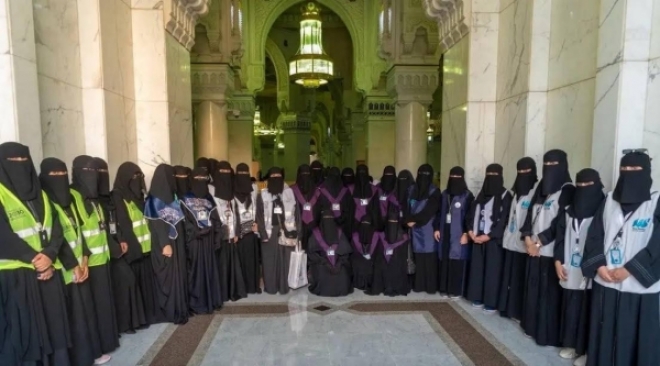 MAKKAH — The General Presidency for the Affairs of the Two Holy Mosques has approved 1018 female volunteers to serve in the Grand Mosque in Makkah during Ramadan.

The women were recruited through the National Platform for Voluntary Work, which is run by the Ministry of Human Resources and Social Development (MHRSD). They work in translation, aiding the elderly by driving electric vehicles, and providing other mobility services.

Bayan Al-Hadhali, Director of the Department of Social Services and Women's Voluntary Work at the Grand Mosque, said: "Volunteer work is rewarding from various perspectives. By assisting female visitors to the holy mosque, the volunteers can gain many cultural and linguistic skills. The volunteer program is in implementation of the wise leadership's aspirations in serving the pilgrims of the Grand Mosque in accordance with the highest quality standards for worshipers and pilgrims."

The Saudi Vision 2030, according to Al-Hudhali, empowers women working at the Grand Mosque to employ all of their resources, as well as their scientific and professional abilities, to serve pilgrims and visitors. All of this is done with the aim of establishing local and international leadership in the field of volunteers, along with making access to worship more easily available to both men and women.

During the holy month of Ramadan, she stated, the number of charities cooperating with the project increased to 14, which includes government and women's charities. This indicates that the Grand Mosque's maximum capacity is being reached.

Volunteer work in the Grand Mosque continues for 24 hours spread out across four shifts on all days of the week.