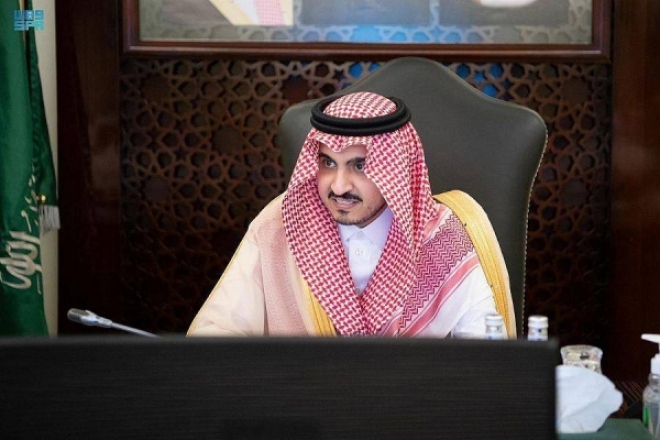 JEDDAH — Prince Badr bin Sultan, Deputy Governor of Makkah region. has chaired the meeting of the Executive Committee of the Central Hajj Committee.

He reviewed the plans developed by authorities in charge of their implementation in the first few days of Ramadan and the plans to be carried out during the remaining days of the blessed month.

In this regard, the committee prepared and operated 9 transportation stations around the Grand Mosque and 11 car parks, in addition to providing 3,000 buses and preparing 13 lanes, which contributed to transporting nearly 15 million Umrah performers and worshipers to and from the Grand Mosque during the past days of Ramadan via Bus Rapid Transit (BRT).

Also, the deputy governor of Makkah was briefed on the authorities’ plans to provide and harness the capabilities to serve the Grand Mosque's Umrah performers, worshippers and visitors, including preparing all its courtyards for worshipers with the application of the highest standards of environmental protection inside and around the prayer halls, ensuring the flow of crowds and the ease of movement by worshippers.

At least 48 gates were allocated for worshipers to enter and 65 prayer halls were prepared in the second Saudi expansion, in addition to preparing many paths designated to guide all the visitors of the Grand Mosque, in order to achieve the smooth movement of worshippers.

Regarding crowd management, plans are implemented that are compatible with densities to achieve the satisfaction of all the Grand Mosque's visitors in the quality of organizational services to ensure their ease of access and performance of rituals until their safe departure. — SPA