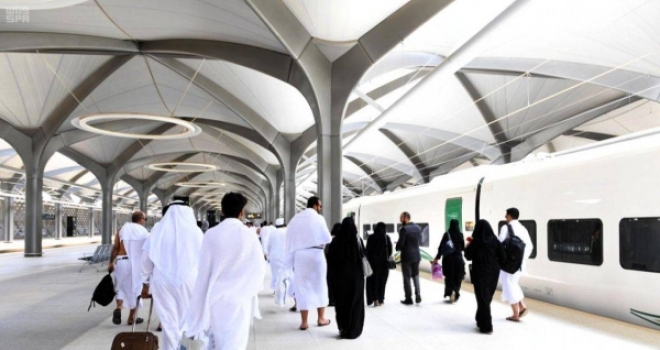 MAKKAH — The Haramain high-speed railway has offered a discount during Ramadan by lopping 50% for its tickets’ price on economy seats between King Abdulaziz International Airport (KAIA) train station to Makkah, Okaz/Saudi Gazette has learned.

The 50% discount will remain valid until May 1, according to an official for Al-Haramain Train. The ticket price before the discount was SR69 between the airport and Makkah stations.

Buses were operated and managed from the train station in Makkah to the Grand Mosque, as the Haramain train witnessed a large movement recently in trips.

The Haramain Railway has made the movement easier for pilgrims and visitors to the Two Holy Mosques.

The Haramain railway also provided Iftar meals to be distributed to passengers before the Maghrib prayer.

The railway runs 50 trips per day and has transported more than 625,000 passengers during Ramadan.

An official source told Okaz/Saudi Gazette that the trips would include several stations: from Makkah Station to Madinah, passing through Jeddah Central Stations and King Abdullah Economic City.

The official said that the Haramain railway trips had increased during the past months to more than 35%.

It is noteworthy that the total capacity of the Haramain trains is about 14,595,000 passengers, and the capacity of one train reaches about 417 passengers.

In addition, the Haramain trains are being part of a project that includes 35 fast electric trains, where the capacity will double to 834 passengers per train at peak times.

He also added that the trains' large seating capacity comes to cover the expected demand for the train especially between Makkah and Jeddah.